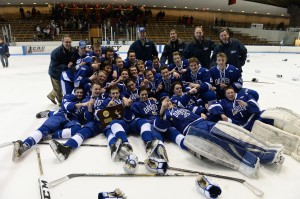 NEW HAVEN – Last season, after a strong regular season, the Darien boys hockey team failed to win the FCIAC tournament title and had a disappointing 2-1 loss to Fairfield Prep in the CIAC Division I championship.

This season, the Blue Wave were on a mission to correct those disappointments and needed to beat fierce FCIAC rival Greenwich to accomplish the feat.

Darien defeated Greenwich in the FCIAC final and completed the mission on Saturday. Jack Pardue scored at 5:36 of the second period and Will Massie had 22 saves as No. 2 Darien hung on for a 1-0 win over No. 1 Greenwich for its first CIAC D-I title since 1969.

“I got the puck in the slot off their defense, pulled it back and ripped off a shot that hit the crossbar. It came back to me and then I hit it in for the goal,” Pardue said. “This feels great.”

“I never thought this would be a 1-0 game and we weren’t trying to play it that way,” Darien coach Chris Gerwig said. “The clock kept running and we wanted to keep playing hard until time ran out. This is very emotional, it will take one or two days for me to take it all in. “Jack Pardue can always find the back of the net in crunch time. And our goalie and our defense has been great. In the last seven games we’ve allowed only seven goals and today we had the shutout.”

In the scoreless first period, Darien outshot Greenwich 9-7 and both teams had decent chances to score. Matt Lodato had a pair of shots and the best one came 13 seconds into the game. He fired a rising shot toward the upper right corner and Massie snatched the puck with his glove. Craig Miller had a close-range chance to score from about four feet in front of the right post. But Archino made a pad save and quickly cleared the puck away with his stick at 2:35.

There was a lot of up-and-down action in the second period. But Darien speedster and high-scoring forward Pardue, who had two goals in the semifinals, gave the Blue Wave what proved to be the game-winning goal. Greenwich had chances to tie late in the period. The best chance came with a two-on-two breakaway down the left wing. Michael Mozian sent a cross pass to Kristian Cunningham who sent a high shot toward the upper right corner of the net. But Massie made the glove save with 15 seconds left in the period to preserve the one-goal lead at the second intermission.

The Cardinals (21-3-2) had two good chances to tie the game in the third period. 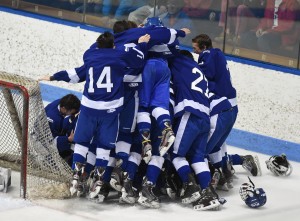 There was a scramble in front of the left post and the puck squirted loose toward the right post. Ian Fulton was nearest Greenwich player but couldn’t beat Massie to the puck who cleared it away. Colin Kelly had a wide open shot at the left circle with 18 seconds left in the game but Massie made the save with his pads. Greenwich coach Bob Russel tried to pull his goalie with 50 seconds to go. But he couldn’t get Archino’s attention who was focused on the puck and the officials.

“We had our chances, sometimes you shoot the puck and it goes in, sometimes they don’t go in,” Russel said. “We created opportunities but Massie made some great saves. “We tried to get Archino’s attention to come off the ice, but it wasn’t his fault. He was so focused he didn’t see us. It would have been nice to have that man-advantage the last 50 seconds.”