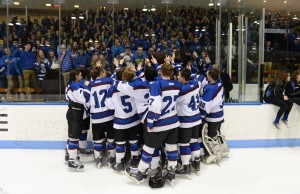 NEW HAVEN – The Suffield-Granby-Windsor Locks boys hockey team has been one of the hottest teams in the state.

The Wildcats entered the CIAC Division II championship game with North Branford on Saturday with 14 wins in their last 15 games thanks to balanced scoring, solid on-ice defense and solid goalie play by Shane Kertanis.

The Wildcats used all three phases of the game in the final with Jake Bourdeau and Jake King scoring two goals each and Kertanis making 23 saves to lead Suffield/Granby/Windsor Locks to a 4-1 win over North Branford for the co-op team’s first state title.

“This is amazing, winning the championship hasn’t sunk in yet,” Bourdeau said. “It’s just amazing to play here at Ingalls Rink.

“North Branford is a very good team and we had to fight hard for everything we got tonight.”

Suffield/Granby/Windsor Locks coach Nick Booman credited his team’s development for its success this season. He said his team is a different one now than the one that lost 3-0 to the Thunderbirds in the regular season.

“This is all due to our growth from beginning to end,” Booman said. “We just got better and better, the kids bought into the system with our goal to play our best hockey in the tournament.

“This is a great win for our program but it’s all about the kids. They worked hard for this.”

The Wildcats set the tone in the first period by outshooting the Thunderbirds 9-3. North Branford goalie Will McEwen (28 saves in the game) made a half dozen quality saves to keep the T-Birds in the game. But the nine-shot barrage took its toll with the Wildcats taking a 1-0 lead at the first intermission.

There was a scramble for the puck in front of the net and Jake Bourdeau was able to get to the loose puck. He wristed a shot inside the right post for a power-play goal to give the Suffield co-op a 1-0 lead at 12:20 of the first period. 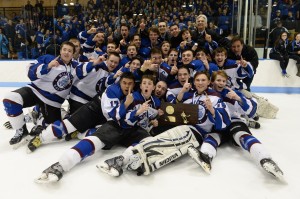 One of North Branford’s best shots came with 30 seconds left in the first period. Chris Russo took a wide open shot at the left circle but Kertanis made a pad save and cleared the puck away.

It was more of the same in the second period with Jake King padding the lead for the Wildcats. King scored off a shot near the right post to give the Wildcats a 2-0 lead at 7:47.

The most eventful thing to happen in the period was the electric scoreboard went dark, stopping play for several minutes. Play resumed without the scoreboard on, but it came back online late in the period.

The Suffield co-op added to its lead with goals from  Bourdeau at 9:36 and King at 10:59 for a 4-0 lead. King’s goal was an empty-net goal. With the T-Birds on the power play, North Branford coach Ralph Shaw wanted an extra advantage and pulled McEwen.

Alec Martone went on to score a power-play goal for North Branford at 11:32 to cut the lead to 4-1.

“The difference in this game than the one we won earlier agiantst them is they capitalized on their chances this time and we didn’t,” North Branford coach Ralph Shaw said. “We matched up well with them but we just couldn’t finish our chances.

“When the scoreboard went out, that delay helped us rest and energized us. But it wasn’t our night. Our boys are disappointed but this can’t take away from the special season we had and the hard work it took just to get here.”