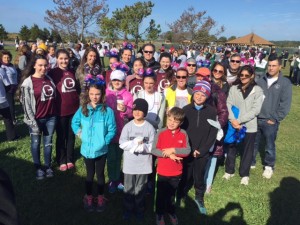 Members of the Canton girls volleyball team joined a very special team at the CTBTA Path of Hope. Photo courtesy of Canton volleyball.

With the possible exception of the blacks and oranges of Halloween, the color pink has become synonymous with the month of October.  Breast cancer awareness events and fundraisers now dominate this particular month – and rightly so – but that doesn’t mean it’s the only cause worthy of attention. That is what motivated members of the Canton High School girls volleyball team and their first-year head coach Eileen Holden to take part in the Connecticut Brain Tumor Alliance (CTBTA) Path of Hope and to support a very courageous young lady and her family.

The Path of Hope event is a 5K walk through Hammonasset Beach State Park in Madison to benefit the CTBTA a non-profit which provides hope and support to brain cancer patients and their caregivers (visit http://www.ctbta.org/ for more information). It’s a cause that is near and dear to Holden’s heart after her father passed away from a brain tumor in 2014.

At her previous coaching position of varsity softball coach at New Milford High School Holden organized two separate benefit “Grey Out” games to raise funds and awareness for CTBTA, including the first event which her father attended before his passing. With a new position and new team as the girls volleyball coach at Canton, she decided to try again to take up the cause.

“I didn’t know if I wanted to share the idea of the walk with my girls since I was only their coach for two months,” Holden explained. “But I decided to share the story of my dad and how he was able to attend the first ‘Grey Out’ game days before he passed away.”

With the Path of Hope event taking place in October, Holden now had some interested allies in her team of girls in her goal of trying to “raise awareness about brain cancer and tumors and make it as popular as breast cancer awareness month.” However she wanted to find something her team members could connect with on their own, and not just take part as a piece of her fund raising team. Enter a courageous 11-year old from nearby Avon named Morgan Platt and her family.

Morgan has been battling a highly-aggressive form of brain cancer called glioblastoma multiforme and has become something of a recognized face in the fight against brain cancer in Connecticut thanks to a pair of videos. Her version of Katy Perry’s “Roar” was filmed while during treatment has been viewed more than 140,000 times on Youtube and was covered by many Connecticut news organizations, and then this summer she did it again, creating the CTBTA Fight Song video to Rachel Platten’s “Fight Song.”

Through the CTBTA Holden reached out to Platt’s mother Kathy to see how her team could connect with Morgan and how they could build a relationship.

“Kathy and I spoke and arranged for my girls to walk with Morgan and her ‘team’ at the Path of Hope,” Holden stated. “Her mother was also focused on the girls forming a relationship with Morgan, but also her younger brother (seven year-old) Kyle, who is always dragged around from doctor to doctor or event to event for Morgan.” 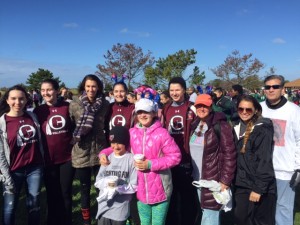 The relationships came to fruition at the Path of Hope on October 4th, when the Canton team met Morgan and Kyle and took part in the event. As the testimonials from her players suggest, it was exactly the type of experience the coach and families were hoping for.

“It was (a) life changing experience because it was amazing to see people of all different backgrounds come together for such an important cause,” said Canton senior Sophia Pelehach. “It was also really inspiring to meet Morgan and her family because they are all so positive despite the struggles they face on a daily basis.”

“The walk was a moving experience that showed me that no matter who you are, you can make a difference,” explained junior Delaney Brown.

It was a successful event by any measure, both for the funds and awareness it raised for CTBTA and its mission, but also the inspiration that the Warriors take from their interactions with Morgan and her family.

“It was an unforgettable opportunity to meet Morgan and her family,” said junior Rachel Falzone. “I had so much fun meeting people and playing tag with Kyle, Morgan, and her friends. Morgan is someone that I can say I look up to, she is brave and she never stopped smiling.”

Holden hopes this is just the first step in a continuing relationship between the Platt family and her Canton volleyball family. She wants her athletes to keep in touch with Morgan and hopes her family will attend some Canton games in the future.

Regardless of any future connection between Canton and the Platt family, on a special Sunday a team bonded and got a glimpse of issues of far greater importance than wins and losses on the volleyball court. That broader perspective is a component of all the awareness and fund raising events taking place on high school fields and courts over the course of a season. Whether the color is pink, grey, blue, green or anything else, along with raising valuable contributions, these events help students understand the impact they can bring, and hopefully inspire them to continue to make a difference in the future.

If that was the goal, it seems apparent based on the responses of the Canton players the time spent in the presence of Morgan and her family will stay with them long into the future.

“It was a great feeling to be there supporting families who have hit some bumps in the road,” stated junior Amber Harraden. “To be playing with Morgan and her brother too, seeing their smiles and energy was beyond incredible. I had an amazing time with some amazing kids and I would gladly do it all again in a heartbeat.