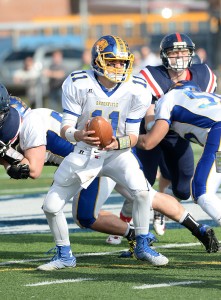 WEST HAVEN – As advertised, the Class M final between South-West Conference rivals Brookfield and New Fairfield boiled down to a game of defense, field position and key mistakes.

Brookfield, the team with a much longer championship resume, didn’t make any key mistakes. New Fairfield, playing in its first final since 1983, made only two plays it would like to have back. But they were the difference as Brookfield repeated as state champ Saturday in a 21-14 victory before 4,500 fans at West Haven High.

With the game tied 7-7 midway through the third quarter, New Fairfield coach Anthony Fata made a decision he said he regretted later. Facing 4th-and-1 at the Brookfield 45, the Rebels went for a first down but were stopped when quarterback Mike Zanca was stuffed by Nick Acquavita, Zach Delia and Drysdale. Four plays later, Drysdale (17 carries for 92 yards) ran 32 yards for the go-ahead score with 5:33 left in the third.

“I put this one on me,” Fata said. “We went for it, seeking some momentum and it didn’t work out. I would have liked to have seen how the game would have gone if I punted it away and put our defense out there. It’s a learning experience. You learn things every day from the decisions you make. When we get back here again, I’ll make a different decision if the situation is the same.”
Brookfield padded the lead to 21-7 with 4:30 left on Harrison Manesis’ 9-yard run. The key play in the 10-play, 69-yard drive was a third-down, 26-yard flea flicker pass from receiver Mike Martinkovic to Dane Borges, the Bobcats’ ace kicker who is also a backup receiver. It was Borges’ first catch of the season.

Manesis grabbed the on-side kick after Sarro’s second touchdown. Brookfield made one first down and ran out the clock. 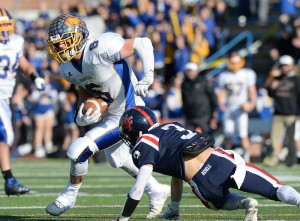 “We don’t worry about running games with our defense,” Brookfield coach Rich Anganaro said. “Nobody has run wild on us all year. Today, we made just enough plays offensively and didn’t turn the ball over.”

Drysdale, who will play at Harvard next fall, ends one of the state’s most legendary careers with over 60 touchdowns and 5,000 yards and two state titles.

“When we were winning Pop Warner championships as kids, we dreamed of winning state titles for Brookfield in high school,” Drysdale said. “Stopping them on fourth and one in the third quarter was huge. It was such a big momentum shift.”