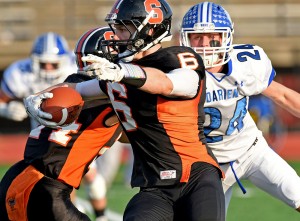 New Britain — Darien did to Shelton on Saturday what it did to nearly everyone it faced this season — it put the Gaels down quickly and never let up.

Darien will finish No. 1 in both The Day of New London state coaches and GameTimeCT / Register and Hartford Courant Top 10 media polls. The Blue Wave were No. 1 in the former and second in the latter two. 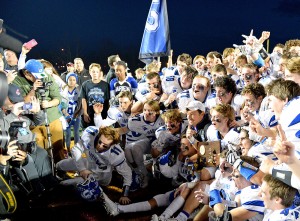 “Our defense has been a swarm all year,” Evanchick said. “It’s just been a great performance from our defense. We’ve come to expect that from ourselves the entire year. I think we did a good job finishing the ride.”

Christian Trifone scored on a 20-yard interception return on the first play of the game.

“He’s been having a great year,” Shelton coach Jeff Roy said of Tuskowski. “It’s just tough to put in the backup quarterback in that position (David Wells), but we played hard. We tried to go in there and we tried to execute. It just didn’t happen after that.”

Darien’s Hudson Hamill had an interception two plays later and returned it 50 yards to the Shelton 20. It set up his 3-yard touchdown from Timmy Graham to put the Blue Wave ahead, 12-0, with eight minutes, 49 seconds still left in the first quarter.

Bobby Trifone scored on a 48-yard interception return with over five minutes left in the half to push Darien’s advantage to 18-0.

Mark Schmidt had a game-high 13 tackles and an interception for Darien. Graham completed 19 of 29 passes for 252 yards with two touchdowns and two interceptions.

Wells threw a 24-yard touchdown to Kevin Robinson with 5:06 remaining in the game.

“It’s the greatest feeling in the world,” Darien head coach Rob Trifone said of the championship. “These boys and their coach are on Cloud 9.”