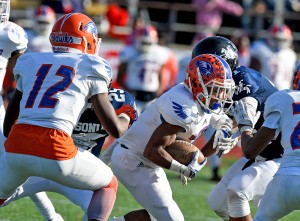 NEW BRITAIN — In a CIAC Class S football championship game filled with pivotal plays and tough coaching decisions, Bloomfield came up with the biggest conversion in the most pressure-packed situation.

Warhawks quarterback Rayshawn Phillips gained the most important yard of his career on a fourth-and-1 carry with 3:19 to play as No. 2-seeded Bloomfield held off No. 1 Ansonia, 31-20, to win the Class S title Saturday at Willow Brook Park.

Bloomfield (13-0) won its eighth state championship and prevented Ansonia (12-1) from extending its state record of 19 titles. It was the record sixth meeting between the programs in a state final.

“It’s surreal to take down one of the top teams in Connecticut,” Phillips said. “That’s just to let you know that people who picked against us — come on, you can’t count us out. We just had to take this home for Bloomfield.”

The Warhawks held a 24-20 lead with 3:19 remaining and had the ball at their own 45-yard line when Ansonia called a timeout approaching fourth-and-1.
Bloomfield, which failed on a fourth-and-short conversion in its own territory earlier in the half, relied upon the 6-foot-4, 220-pound Phillips to move the chains. He dropped back to pass, but the Chargers’ blitz chased him out of the pocket. Phillips scrambled up field and lunged across the 46.

Phillips said that he had to talk Outlaw and the Warhawks’ coaching staff into going for the first down. Russell Thompson-Bishop averaged 52.5 yards on two punts in the first half and could have made Ansonia drive the length of the field with no timeouts for a go-ahead touchdown.

“He wanted to punt it,” Phillips said of Outlaw. “I was, like, ‘Coach, let’s just keep moving the ball.’ I’ve got faith in our offense. We’ve been doing it all year, so why not?”

The official measurement showed that Phillips gained the first down by the nose of the football.

“It’s two inches,” Ansonia coach Tom Brockett said. “We get the ball back there and we win the game. We were running the ball. That would have been a perfect situation with three minutes left.”

A minute and a half later, Phillips threw his fourth touchdown pass of the day to Dexter Lawson for a 31-20 lead with 1:26 remaining.

Phillips was masterful from start to finish. He was 14-of-26 passing for 252 yards and four touchdowns. His first-half touchdown passes both went to Thompson-Bishop on 27-yard throws, giving Bloomfield a 14-0 lead at halftime.

Ansonia rallied behind Tyler Bailey in the third quarter. Quarterback Bryson Cafaro scrambled for a fourth down midway through the third to set up Bailey’s 7-yard touchdown run, which made it 14-6 with 6:25 left in the third.

On the ensuing series, Bloomfield elected to run a play on fourth-and-2 at the Warhawks’ 35. Chazz Sanders recovered Phillips’ fumble at the end of a play that went for no gain to give Ansonia the ball.

Bailey later converted on a fourth-and-goal carry from the 3 and added a two-point conversion run to tie the game at 14-14 with 10 seconds left in the third.
Bloomfield nosed ahead on the next possession. After two long pass plays from Phillips to Thompson-Bishop and Lawson, Raheme Dawkins drilled a 23-yard field goal to make it a 17-14 Warhawks lead with 10:39 to play.

“We had individuals catching nerves, but I’ve been in this situation before,” said Phillips, who won the Class S-Small title last season with Capital Prep-Achievement First. “I told them, ‘Calm down. I’ve got you.’” 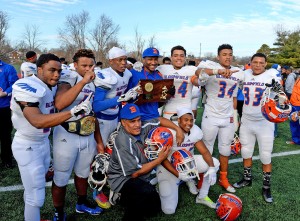 On a day in which Ansonia held a 17-minute edge in time of possession, Bloomfield managed to force a three-and-out on the next possession. The Warhawks drove and cashed in on Phillips’ 12-yard touchdown pass to Jose Crespo for a 24-14 lead with 6:52 left.

“Look at just how many guys contribute to those big plays,” Brockett said. “You can’t put your finger on it. You can’t say it was just (Thompson-Bishop), it was just (Crespo), it was just (Phillips), it was just (Andrell) Pinnock. Too many guys made too many big plays. We got ourselves in a hole and we dug out of it, but I thought it was real important to play with a lead today.”

Ansonia made it a 24-20 game with 3:51 left when Cafaro hit Bailey with a screen over the middle. Bailey ran between the hashes and hurdled over Bloomfield defenders at the goal line for a 22-yard score. The Chargers missed a two-point conversion after a penalty by the Warhawks, and Ansonia failed to recover the onside kick.

Tajik Bagley led the Chargers with 39 carries for 167 yards. Bailey carried 14 times for 31 yards and caught five passes for 68 yards. Justin Lopez recorded 6 ½ tackles for Ansonia, which lost in a state final for the second straight season.