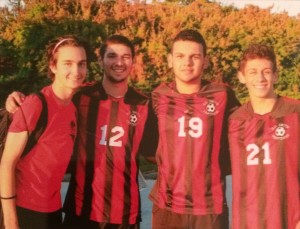 Dylan Randazzo’s (#12) soccer career was full of ups and downs.

Dylan Randazzo is going to be fine. The unflappable E.O. Smith High School senior demonstrated over the last few years he is fully capable of overcoming an obstacle and bouncing back when dealt a bad hand. The story of his athletic career and the resiliency exhibited serves as a telling reminder that wins are not always measured on the scoreboard. Also that character displayed and learned in athletics is a representation of character away from the field of play.

The full impact of Randazzo’s tale is understood best by getting the full scope of his arc, starting as a freshman football player. He entered high school having played soccer his whole life, but thought the beginning of high school was the time to branch out and try something different.

“Freshman year I decided to play football, and that was a big decision for me because I had played soccer my whole life before that,” Randazzo explained.

The football results weren’t entirely what he was after, so after a one-year hiatus he decided to try and get back into the fold with soccer. However his one season away had changed the landscape a bit, causing him to adapt for what would be the first of many times.

“Going into sophomore year I decided to try and get back into soccer. I knew the team was kind of filled up in spots everywhere except goalie and so I hadn’t really played goalie, but decided to train over the summer for that.”

The gambit worked and he wound up splitting time in net earning him the opportunity to contribute. Unfortunately in harbinger of things to come, a broken nose sustained in a game late in the year ended his season prior to competing in the postseason.

He again demonstrated rare self-awareness and wherewithal in deciding that he would spend the next off-season trying to improve enough to get back out of the net and onto the field.  This is supposed to be the dramatic turning point in the story – the moment where Randazzo’s decision pays off after an off-season of tireless work. In the fictionalized story, he dedicates himself to the transition, shows incredible skill and then takes his team by storm, leading them to unprecedented success in his junior year.

Sadly, stories more often than not don’t work that way. In his case, playing recreational soccer in the spring to have some fun and get ready for the new campaign he was rewarded with another injury – this time an ACL tear that would force him to miss the entire junior season he had been working to take part in.

“Hurt me a lot, knowing I was going to miss my entire junior year,” Randazzo said. “But I say it a lot and my whole family thinks it too, it kind of best thing that could have happened to me sports wise.  I Have such a different mentality now about myself and trying to be a better athlete.”

Despite dealing with the frustration of missing out on the season, Randazzo stayed involved with the team as it improved from an 8-8 mark his sophomore year to enjoy a 12-1-3 regular season mark in the Junior year he could not take part in.

“I learned it’s not all about being able to play and everything, as long as you are on the team you’re able to help in some way that’s positive.”

A high school athletic career that had now suffered through numerous fits and starts was now 3/4ths complete. Not a sole would have begrudged Randazzo if at any point he decided sports was just not where he wanted to be spending his time, or if it was too painful to be on the sideline while the team he desperately wanted to play for was thriving. He never made that choice, and instead decided to double down.

“[Sports] Just been my life, I couldn’t imagine not playing sports and not being involved. When I found out I had torn my ACL I cried right away because I knew how long it was going to take to be out and come back. The thought of being a part of something else or not playing never occurred to me. I just knew I had to come back and get healthy again so I could play. I couldn’t imagine not being a part of soccer or the team.”

Now, finally, this must be where the story reaches its dramatic conclusion and our hero rides off into the sunset with his deserved happy ending. And that is true, to a point, but Dylan Randazzo’s saga is never quite that simple. He did make it back on to the soccer field, and was recognized for his leadership and commitment by being chosen as one of the squad’s co-captains for his senior year and earned his spot as the team’s starting center back. He played significant minutes and helped the Panthers to a 13-3 regular season mark and into the Central Connecticut Conference Tournament.

With his final season winding down, he hoped to go out the way all seniors do, leading a magical postseason run into CIAC postseason. But once again, his legacy and story would prove to be much more complicated as in a final practice before the team’s first CIAC Tournament game he once again tore an ACL. No postseason. No final chance to leave his mark. His high school career was over.

“It’s bittersweet because it’s great to be a part of the team and everything for three years on varsity, but a lot of frustration obviously,” Randazzo noted. “I’ve always looked at these situations as if there’s nothing you can do, it’s a freak accident but you have to get past it, and I will. I might be a little mad when I look back but still happy with what I was able to do.

There is no question this story is heartbreaking. Dylan Randazzo has suffered enough bad breaks to last several athletic careers. Yet what makes it worth telling is how with each setback, he chose not to use it as an excuse, but as a challenge and opportunity. It’s that part of the story – not the lack of a big explicitly victory or triumph – that demonstrates how successful his athletic career has been. Perhaps most tellingly, his greatest “win” was not an on-field victory, and actually came in a loss.

EO Smith’s last regular season game this year came against rival Tolland. A hard-fought battle, the Panthers lost on a goal in the closing seconds of overtime; a loss that cost them a conference division title. With his teammates understandably devastated after such a heartbreaking loss, Randazzo seized the opportunity to lead and offer some perspective.

“Everyone had their heads down upset, I knew I was a captain and had to pick my team up after this loss so I quickly brought them together and told them we have to keep our heads up and stay focused. You can be upset about it tonight but when we come back to practice tomorrow we need to regroup and refocus on the next game.”

It was a message Randazzo was uniquely suited to provide, and one he would have to remember himself a few days later when another injury would prevent him from providing the conclusion to his career he wanted.

“After every loss we’ve had I’ve never put my head down because first of all, I’m just lucky to be out here, and second of all you’re going to get down sometimes in sports with injuries and losses the only way to keep going as great teams or great players is to not keep your head down and stay positive.”

E.O. Smith Athletics Director Steve Robichaud witnessed that moment after the Tolland match, and it only clarified for him what Randazzo’s athletic career and story represented.

“Dylan has a great story, and quite frankly, it’s one of the finest high school athletics stories I’ve experienced in my career,” Robichaud explained. “In my opinion, what he did at E.O. Smith over the past three years is nothing short of phenomenal.”

Leadership, commitment, and perspective are how an athlete who contributed on the field off-and-on over the course of three seasons can have a career described as “phenomenal.” And it’s how we can say that regardless of where he goes from here on, Dylan Randazzo is going to be just fine.