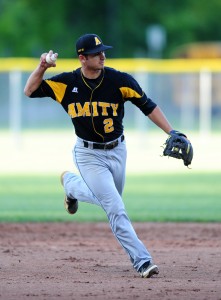 Introductions and Updating of Directory Information – Committee Chair Azzara asked everyone to introduce themselves and to complete the mileage sheet and update all directory information as necessary.

Review and Approval – Baseball Committee Minutes of May 29, 2015 – After review and discussion the Committee moved to approve the minutes as presented.  Motion to approve – S. Patrina, second – J. Cross – Approved

Review of the 2015 Championships – Tournament Director Balsamo reported that all went well but he was disappointed in the attendance at some of the semi-finals.  Three of the semi-final games were re-scheduled due to weather and sites were changed as needed, however the match-ups should have resulted in better attendance.  The committee briefly discussed possible reasons and concluded end-of-year issues could have been the cause.  Schools in many cases were in exams or the school year had ended.  The CIAC calendar was in the cycle where the championships were on the latest possible date.

Filling Tournament Brackets to 32 Teams – The committee at their May 29 meeting approved moving forward with a proposal to the CIAC Board of Control to fill all brackets to 32 teams to level the playing field for all teams due to the pitching rules and to increase participation in the championships.

After review and discussion, the committee voted to approve the final version of the proposal that would go to the CIAC Board.   Motion to approve – J. Wrenn , Second – S. Patrina –  Approved

Pitch Count – Discussion – The committee continued discussion from their May meeting on establishing a pitch count as part of CIAC rules.  A draft proposal was present for discussion that suggested the combined use of innings and pitch count as discussed at the last meeting.  Pitch count would be graduated with less pitches in the first weeks of the season and increased in the second half of the season.  The ten inning rule and/or pitch count when reached would require three (3) days rest as a minimum.  Rules for sub-varsity were also discussed and reduced pitches at the level.

The committee discussed the proposal in detail and they concur that a pitch count is needed.  The questions of number, how it is monitored, and penalties for those who exceed need to be clarified.  The coaches on the committee were asked to discuss pitch count with their peers as to what is an appropriate number.  Concerns were raised about small schools and the limited number of pitches they usually have and what a pitch count can mean.  The committee realizes that this is a health and safety issue.

After discussion the committee agreed to establish a sub-committee charged with drafting a proposal for the January meeting.  The committee will meet at the end of October with the date (TBD) – all committee members will be invited.  Coaches in the meantime will gather information from their peers.

After a lengthy discussion the committee decided to keep the present system of breaking ties while baseball is in a two-year trial of filling the brackets to 32 teams.  Motion to keep present tie break procedures during trial period – J. Wrenn – Second T. Neville – Approved.

John further shared a letter from Mike Pitruzzello, the 2015 honoree, and how pleased he was to be selected by the committee for this honor.

Starting Date for Pitchers and Catchers – Discussion continued from the May meeting on this topic.  It was suggested the committee consider expanding the time to a two week window when an every other day schedule is used.  Also the number of pitchers/catchers was discussed.  The coaches on the committee volunteered to draft a proposal for consideration at the January meeting.

Note:  Sub committee on pitch count will meet at the end of October – Date /time TBA