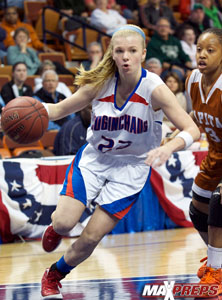 Introductions and Updating of Directory Information – Committee Chairs S. Riffle and W. Zalaski asked the members in attendance to introduce themselves and their role on the committee.  Additionally, each updated their directory information as necessary.

Review of the 2014-15 Financial Report for Both Boys and Girls Basketball – CIAC staff reviewed the composite financial report for 2014-15.  Overall both the boys and girls net income was down for the year as compared to 2013-14.  Overall net income for boys was off by $12,000 and girls by almost $20,000.  Some of the loss on the girls side can be attributed to how income is divided for the finals.  Generally, a smaller percentage of the gate is credited to girls.  The committee discussed doing a 50/50 split and the budget projection for boys basketball revenue be moved down and the girls revenue up to accurately reflect the change.

Further, the committee discussed possible reasons for the decline in income and noted that many early round games were run at a loss.

Paul Hoey reported that CIAC returned $107,249 to schools this past season to cover costs for first, second and quarter-final games and site director fees.  Additionally, CIAC paid for all officials from the first round on which was $57,515, resulting in a combined total of almost $165,000.

Filling Tournament Brackets to 32 Teams – Request for a two-year trial for boys and girls basketball.  The committee reviewed a draft of a proposal that will be submitted to the Board of Control for approval of a two-year trial.  Data from the last five seasons shows that thirty-five (35) more boys teams would have been allowed to participate in tournament play and 61 girls teams, thus increasing participation.  The committee discussed the proposal, which was endorsed at the May meeting and voted again to move the request forward to the CIAC Board of Control for consideration with a start date of February/March 2016.  Motion to approve and move forward – S. Russell / second F. Rossi / approved.

Note:  The request will be placed on the September 24 CIAC Board agenda.

Review and Updating of the 2016 Tournament Packets – The committee reviewed recommendations prepared by the tournament directors and CIAC staff regarding the number of proposed divisions for the 2016 tournament.  Data on the number of qualifiers for each division over the past five years for girls was reviewed and discussed.  Data on the percentage of qualifiers on the boys side was also reviewed.

A question was raised if all divisions should be an equal number since the committee is proposing to fill brackets to 32 teams.  Discussion ensued on this question as it may not be necessary to have as many teams in Class S for example if you are going to fill the bracket regardless of the numbers of 40% qualifiers.  Traditionally, divisions were somewhat unbalanced in an attempt to fill the brackets.  Class S, therefore, always had more teams.  Since the committee is requesting a two-year trial on filling the brackets it was suggested this issue be reviewed during the trial to see what the pros/cons would be if the divisions were balanced.  The committee, by consensus, agreed to review balanced divisions during the trial period.

After discussion the committee approved the following numbers of teams for each division during the 2016 tournament:

The committee then reviewed data on team placement and movement as a result of the “success factor” for schools who draw from outside the school district.  Each division for both boys and girls was reviewed in detail and enrollment lists were shared with the committee showing which school moved up as a result of the success factor and which school moved down when divisions were rebalanced.

The committee reconfirmed if any school that draws more than 25 students, gender specific, from outside of the district in any combination of programs would be subject to the “success factor”.

After a thorough review and discussion the committee voted to approve the teams assigned to each division for both boys and girls.

Motion to approve the teams assigned to each division after accounting for the “success factor” and request move up in division to LL – M. Williamson / second B. Fell / approved.

The committee then reviewed the updated tournament packet for 2016.  Additions will be made to the packet if the CIAC Board of Control approves the request for the two-year trial.  Further, the committee was asked to review the document in detail and check for any errors and report them back to CIAC.  All changes need to be submitted by September 30.  All pertinent changes for 2015 were reviewed in detail such as the new point system approved at the May meeting to break ties.

Shot Clock – Paul Hoey reported the NFHS Basketball Rules Committee opted not to change the rules regarding the use of a shot clock in high school basketball.  Consequently no change is in store for Connecticut since CIAC complies with all NFHS rules.  The coaches on the committee would like to continue to pursue using a shot clock and suggested they work as a group to look at some creative ideas that might get NFHS approval for an “experiment.”  Shaun Russell will work with the group to come up with some ideas/recommendations for review. Any suggestions will need to consider cost for schools for equipment and possible on-going fees for a clock operator at home games.  The coaches will report back at the next meeting of the committee.

Out-of-Season Coaching Survey – Steve Wysowski reported on the survey that was recently completed by coaches, athletic directors and principals.  The results show that coaches are generally in favor of allowing out-of-season coaching while most principals and a good number of athletic directors are not.  Steve further reported that superintendents were not in support of any change.  The survey also shows that member schools would like to see more clarity regarding the present rules.  At this point, there does not appear to be enough support to change the rules.  Those who want to see a change in the rule will need to work with their principals and superintendents to gain their support.