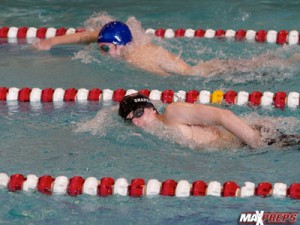 Discussion of medal presentation at the divisional meets – The medals have been distributed in a variety of methods at the divisional meets.  The committee felt it would be better if the medal distribution method was standardized throughout the four divisional competitions.  On a motion by Suzie Hoyt and seconded by Diane Callis, awards should be presented prior to each championship heat in all four divisions and at the open meet.  Motion passed.

Bob Lehr will send an email to tournament directors and coaches reminding them of that change.

The committee discussed ways to make the meets more efficient; however, no substantive changes were recommended.

The packet was reviewed and changes made as needed.  Times were adjusted.

Motion by Suzie Hoyt to have two alternates for the trials, finals and the open meet / second by Diane Callis / motion passed.

Motion by Suzie Hoyt and seconded by Chris Zagorski – When alternates are used, reseeding is to be done at the finals and the open.  Motion passed.