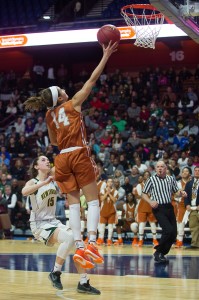 Uncasville, Conn. — Junior Lizahya Morgan scored seven of her 15 points during a key third-quarter run to lead Capital Prep of Hartford past New London on Sunday, 51-48, to win the Class L championship and its fourth straight state title.

The fifth-ranked Trailblazers (24-3) join Southington (1986-89) and Westbrook (1983-87) as the only girls’ basketball teams to win four-or-more successive CIAC titles.

“Whatever we ask them to do, they go above and beyond that,” Capital head coach Tammy Millsaps said. “They earned this state championship.”

Morgan, in particular, gave it her all despite playing with a dislocated pinkie suffered against New Fairfield in the semifinals.

Morgan missed all 10 of her shots in the first half, got her hand wrapped at halftime, and scored seven unanswered points early in the third quarter.

“I started off a little slow,” Morgan said. “My hand was hurting, and I didn’t get it taped (before the game).

“Miss Millsaps got us pumped in the locker room during halftime, and we just wanted it more, so I had to show it on the court; leave it all on the court.”

India Pagan had a game-high 21 points and 16 rebounds for the second-seeded Whalers (25-2).

“I told the girls that we accomplished so much,” New London coach Holly Misto said. “Don’t let this (loss) take away from that because (you’re) going to remember this season for the rest of their lives.”

Capital led, 26-25, with over six minutes left in the third quarter when Morgan went coast-to-coast for a layup. She made a pull-up jumper on the Trailblazers’ next possession.

Morgan followed with a 3-pointer to extend Prep’s lead to 33-25 with five minutes, 34 seconds remaining in the quarter. 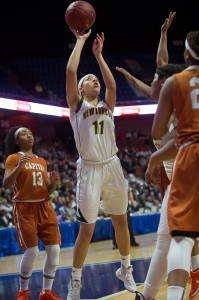 Morgan was her team’s fifth-leading scorer (5.4 ppg) prior to Sunday.

“I’m proud of Lizahya,” Millsaps said. “She didn’t practice much this week. … She came out and played like the beast that she is. Little tiny body (5-foot-2) and has the mindset of a warrior. Nothing is going to keep her down, and she showed up toady, and she showed up.”

New London post players Charee Osborne and Elmore cancelled one another out because they made it difficult for the other to score. That made the contributions of Morgan and White (who had averaged 6 ppg) even more important.

“(We knew) they were going to shut (Elmore) down,” Millsaps said. “NaJae stepped up. Lizahya stepped up. They played huge just when you needed them.

“They’ve got another year under their belts and I’m excited about that.”