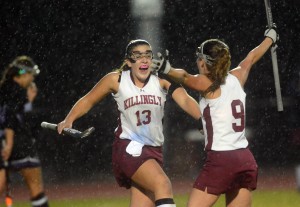 Killingly’s Alyssa Rainey (#9) had much to celebrate in her high school career. Photo provided by Alyssa Rainey.

There is no one path or model for a scholastic sports career and Alyssa Rainey certainly had no real idea how her high school athletic career would play out. That’s part of the appeal of high school sports; there is no right or wrong path, just a lot of different paths for different students. But even if the Killingly High School senior had a specific path in mind, the one that ended with her as a record-breaking standout for the field hockey team would have seemed a bit far fetched.

Rainey may not have anticipated all the athletic success that would be a part of her high school career, but she is absolutely aware, and more than willing to share, how critical her athletic involvement was to her overall high school experience. A brief exchange with the senior provides a brochure’s worth of sentiments espousing the value of education-based athletics participation.

“The benefits of competing in high school sport for me has been endless,” she explained. “But the most important thing is has given me is happiness and something to look forward to. It has changed my outlook on life and has added so many things.”

While participation in athletics was never going to be a question for Rainey, she entered high school planning to diversify her competitive experience. She opened her freshman year on the field hockey team and had plans of also joining the basketball and lacrosse teams in subsequent seasons.

She opened her career manning the goal cage on the junior varsity team, working to find her way in the sport. An early varsity appearance in goal featured 22 saves and helped the team to a 0-0 draw with East Lyme. From there her planned career path took the first of its significant turns as with some slight agitating and a bit of “pity” from her coach gave her one opportunity in the field. It would be cliché to simply say “the rest is history” once she found her way into the field, but the fact is, that field opportunity did lead to some history. Though it was a long process.

The rest of her freshman season was spent playing goal in JV games, then taking the field in varsity contests, and before long earning starting spot in the field. Field hockey’s hold on the freshman was cemented when she scored one of Killingly’s two goals in a snowy CIAC Tournament qualifying round double-overtime win over Old Saybrook that moved the Redgals into the full CIAC tournament bracket for the first time since 2008. It was official, Rainey had worked her way into the field and would not relinquish that starting spot. And field hockey would not relinquish its hold on her. The high school athletic path that initially was going to feature different sports in different seasons again took a detour.

“Field hockey took over my live after my freshman year,” Rainey noted. Though she did stay on the basketball team her freshman season and was on the track & field team as a junior, it became all about field hockey, and the team and her teammates throughout the rest of her time at Killingly. 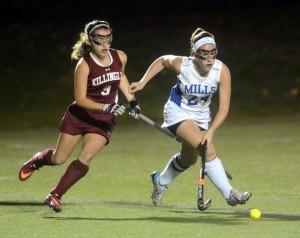 Here, in discussing how quickly she came to fall completely in love with her sport and the community around it, is where Rainey’s brochure-speak starts pouring out. Most appealingly, it seems remarkably genuine, and illustrates how special it can be when student-athlete discovers the perfect outlet for their abilities.

“Field hockey gave me so much,” Rainey explained. “It gave me something to love, gave me my friends, it gave me my morals, ethics, and my ability to persevere. Field hockey taught me to never give up, to fight ‘til the end, and to set your goals high because the sky is the limit.”

Rainey believes field hockey gave her all of that and more. What did she give field hockey? Goals. Lots and lots of goals (and assists, for that matter). Entrenched in her starting field spot as a sophomore she helped spark the offense from her right midfield position as the Redgals improved from 6-7-2-1 her freshman year to 10-5-1 in her sophomore campaign. Her junior year saw another position change, this time to a central midfield position and that’s when the goals really started to come. Rainey’s play helped power Killingly to a 14-2 record in her junior campaign and the team reached the CIAC Class S semifinals. She capped her career with a senior season that saw the team go 11-2-2-1 and her set a new school record for career goals and goals in a season.

Not surprisingly with that individual and team success, Rainey points to the relationships with her teammates and coaches as the element that stands out just as much as the achievements.

“Field hockey has been an amazing experience for me with having amazing coaches, a core group of players that that all ended up being my closest friends, and just a great team chemistry, environment and feel. Our team parties were so much fun. We would eat so much food, and play games, and tell funny stories and just soak each other up.”

A devotion to field hockey and her team may not have been the path Rainey expected to follow for her high school career, but it is one that paid significant dividends for her and her team. Perhaps more critically the field hockey team provided the sort of exceptional experience that can’t always be found in a classroom, and brings a sense of purpose and balance for students.

These are the ideas that proponents of participation in interscholastic athletics and activities espouse all the time. In this case, we have the benefit of a real-life student-athlete in Rainey who enjoyed tremendous success on the field to eagerly validate the belief that it was about much more than on-field success. 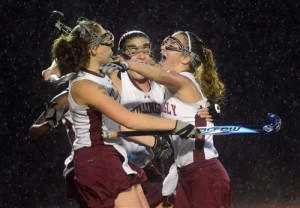 Rainey found her place among her teammates on the field hockey team. Photo courtesy of Killingly field hockey.

Rainey clearly found the right path for her during a special high school career. Being a part of the field hockey team helped her navigate her way through the always-tricky terrain of high school, and come out the better for it on the other side. Once again, Rainey herself expresses the sentiment the best.

“I would like to be a representative of how it [competing in sports] changes your life. How it shapes you into the person you will be in the future. I feel as though, due to sports, it has given me a place at Killingly High School.”

Here’s hoping countless other students find their place with as much effectiveness, passion, and joy as did Alyssa Rainey.