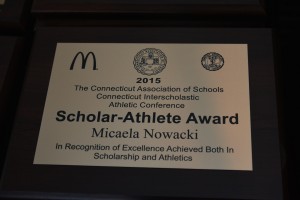 When former CAS-CIAC Executive Director Michael Savage worked to create the Scholar Athlete program on a state-wide level beginning with the 1983-84 school year, it was an immediate success. Schools jumped at the chance to honor one female and one male senior that represented all the great ideals of a student-athlete and 294 students were honored the first year.

Now, in the 33rd year of the award program – one of the longest running among CAS-CIAC’s honors – a very large round number will be achieved. On Sunday, May 1, when Navarre Pratt of Wethersfield High School has his name read and reaches the stage to receive his plaque at the annual event, he will become the 10,000th Connecticut High School senior honored as a CAS-CIAC Scholar Athlete.

That is a whole lot of deserving student-athletes who have been chosen based on the written criteria that they are students whose academic and athletic career have been exemplary, whose personal standards and achievements are a model to others, and who possess high levels of integrity, self-discipline and courage. That’s a daunting description, but in essence the program is intended to honor two highly-deserving students who have excelled in all areas, including athletic achievement.

Because the recognition is selected by the schools themselves based on the impact and involvement they see from their students, this is an honor that can provide a spotlight to students who represent a wide-range of athletic achievement.

Former CIAC Associate Executive Director and longtime school administrator Paul Hoey believes the variety of students who are recognized is one reason for the program’s long-running success.

“It’s a wide variety of kids that are honored, it’s not necessarily the number one or number two athlete, it’s kids who were involved in everything and athletics was just a part of their overall school involvement. That’s what’s great about it, they might not have been a starter but they were a great contributor to the school.”

Honoring those students, the ones who provide a stellar representation of all that high school sports participation can be, has always been the goal of the banquet. That was true in year one, and it is true now as 10,000-plus outstanding individuals have walked across the stage and had their picture taken. 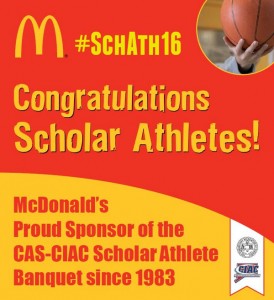 The longevity and success of the program is also due, in no small part, to the commitment and support of the McDonald’s owner/operators in Connecticut and Western Massachusetts. They have worked with CAS-CIAC since the event’s inception 33 years ago, and its growth and success is a reflection of all they have put into it.

“For 33 years, McDonald’s owner/operators in Connecticut and Western Massachusets have proudly partnered with the Connecticut Association of Schools/Connecticut Interscholastic Athletic Conference to honor outstanding Connecticut students. To have reached this milestone of honoring more than 10,000 students with this program is incredible. The Scholar Athlete award encompasses so much of what we try to do in our communities every day to support education and youth,” said Scott Taylor, McDonald’s owner/operator and president of the Connecticut and Western Massachusetts McDonald’s Owner/Operator Association.

The goal was the same in the beginning as it is now; to honor some of the best student-athletes in each CAS-CIAC member school. Jessica Dorman, a senior from Newtown High School was one of 294 honorees that first year. Even in that first year being selected based on achievement in multiple areas was meaningful.

“I definitely remember being very proud,” Dorman explained in a recent phone call when asked about being chosen for the honor. “I wasn’t setting out to be a well-rounded individual. Sports had always been a part of what I did, playing with my parents, or brother or neighborhood kids. I was very proud to have those combined interests of mine of studying and playing sports being recognized.”

The valedictorian for that Newtown class, Dorman also was a fixture on the softball field, and joined the soccer team when the school added the sport in her senior season. She is a prime example of a student who excelled in multiple areas and while not a star on the athletic field, got much from her participation.

“I played sports but was not one of the superstar athletes, but it was important to me and memorable and I appreciated that combination aspect of this award. It’s one thing when you get an award, and I can’t even remember I was valedictorian and I got some math or English awards but those sort of specialized things are more what’s my grade point average whereas this because it recognized a more balanced approach, yeah, that meant a lot.”

We’ve chosen to highlight Dorman, but this could have been a chance to highlight any of the Scholar Athletes from that first class as we marvel at the history of this honor. We could write about Bill Masse from East Catholic who excelled in baseball and soccer and went on to earn an Olympic Gold Medal in baseball and who still works as a professional baseball scout while coaching young athletes and remaining supportive of his alma mater. Or Paige Kopcza who was a standout on the softball field at Southington High School, whose son was a stellar football player at the school and who still works at Southington now. Or Mary Beth (Prew) Anderson the first female honoree from Suffield High School who went on to play soccer in college at Notre Dame while it was still a club sport, and continued playing throughout her life and has as successful career implementing software solutions for healthcare companies and has encouraged her two daughters to be active in athletics.

That athletics involvement served all of these students well during their high school careers, and continues to serve them and fill out their stories as they moved away from high school. The message often articulated is that the lessons learned through athletics participation can carry on well past high school – the benefits don’t just exist in the moment but last for a lifetime. It certainly has been the case for Dorman.

“For me, sports always was, and has remained sort of the easiest way for me to meet people and develop friendships,” Dorman explained. “I haven’t moved all my life but have moved to several new places and always seek out recreational teams to join when I come to a new place. Moved to New Orleans I started an office softball team that brought together people from all different departments who wouldn’t otherwise have known each other. [Sports participation] provides a really good complement and balance to reading, writing, thinking, the other activities that engage me more regularly in my life.” 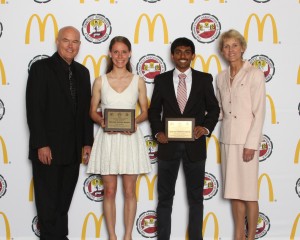 Those are the stories from year one, now here we are, more than 30 years and 10,000-plus Scholar Athletes later. Fittingly, Wethersfield senior Navarre Pratt serves as a fine example of the all-around achievements of these honorees. Navarre competed in three sports all four years of his career as a member of the football and indoor and outdoor track and field teams. He was a member of two Central Connecticut Conference (CCC) championships football teams and a member of Wethersfield’s 2016 Class L State Championship Indoor Track team as a pole vaulter. He will be receiving a National Football Foundation scholarship this year and has earned all-academic accolades from the CCC in all three sports. Navarre is a member of the National Honor Society and the National Social Studies Honor Society and has been on the honor roll every year in high school while challenging himself with demanding courses such as AP Calcululs, AP Computer Science, AP Physics, and AP Psychology during his senior year.

The fact is that we are highlighting the 10,000th Scholar Athlete recipient because it’s a nice round number and it demonstrates the great history and reach of this program. This story could have been about the 9,987th honoree, or the 7,655th or so on and so forth. That’s really the point of this walk down memory lane and the idea of revisiting all this history.

Every single one of the students who have received the Scholar Athlete plaque has distinguished themselves with all that they achieved during their high school careers, and those efforts deserved to be applauded. That is true for the first student who received the honor, and will be true for all those going forward. These are exceptional students and people, and CAS-CIAC is proud to congratulate and recognize everything they do with as special an event as possible. So we will happily keep counting up to the next round number and trying to honor the achievements of every single one of these exceptional Scholar Athletes.