In 2008, the National Federation of State High School Associations, of which the CIAC is a proud member, began its “National High School Spirit of Sport Award” program. 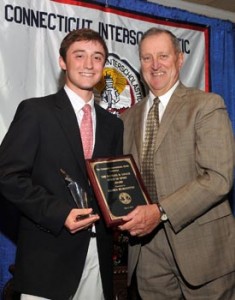 This prestigious award seeks to recognize individuals who exemplify the ideals of the positive spirit of sport that represent the core mission of education-based athletics. The award may be given in recognition of a specific act or for an activity of longer duration.

It could be awarded to an individual (or group) that:

Each year, the honor is conferred to eight section winners as well as one national winner. The recipient must be an individual or team from a high school that is a member of an NFHS-member athletic or activity association. The recipient could be a coach, athletic administrator, administrator, trainer, contest official, student-athlete or any others associated with the school or the school’s athletic program, or an individual(s) associated with the school’s performing arts program.

In 2010 the CIAC established its own Spirit of Sport award named in honor of former executive director Mike Savage to honor deserving individuals within the state of Connecticut. In 2012, CIAC recipient James Burgoyne of Darien went on to be honored as one of eight sectional recipients of the NFHS Spirit of Sport award.

Please read the stories of these outstanding recipients who embody all that the CIAC and NFHS are working to promote. And the CIAC encourages parents, fans, coaches, administrators and athletes to contact the CIAC with nominees for these tremendous honors as nominations for the award are generated through the CIAC in consultation with its member institutions.

2012 - James Burgoyne (Darien)
At Darien High School, James Burgoyne has been a four-year varsity golf team member, capped by being selected captain his senior year. He has placed highly in several metropolitan PGA golf tournaments during that time.

Burgoyne has been equally outstanding in the classroom, where he has maintained a 3.91 grade-point average. A member of the National Honor Society, Burgoyne takes several AP and honors courses, and he scored a 2,200 on his SAT. While embodying the ideals of exemplary athletic and academic achievement is outstanding in and of itself, what has really set Burgoyne apart from the crowd is a volunteer program that he developed as a mere sophomore.

At that time, Burgoyne wanted to do something to support America’s troops overseas and their families stateside. He became aware of the PGA’s “Birdies for the Brave” program in which sponsors donate a certain amount of money per birdie made, and he approached Darien High School golf coach Tom O’Donnell to see if there might be a way in which the golf team could become involved with it.

“I was immediately struck by two things,” O’Donnell said. “First, this is a great idea, and second, what an impressive and mature young man to show such empathy, gratitude and initiative. As a direct result of his efforts, $3,500 was raised and donated to the program on behalf of the Darien High School golf team.

“That alone would have been significant, but while communicating with the PGA Tour on the project, I discovered that Darien High School was the first high school in the country to be involved with the program. As a result of our success, the PGA Tour decided to initiate a ‘Birdies for the Brave Golf Team Pledge Program,’ and now other teams are starting to get involved. “Utilizing sports to help others is one of the most positive values of athletics and James Burgoyne has helped remind us of that. In addition, he has also reminded us that charitable work in sports in not the sole responsibility of the professional leagues and that each of us can use the love of sports to make a positive impact on the lives of others. James Burgoyne started all of this in motion, but there is no telling where it will end or how many people will be helped because one athlete used his love of sport to show his gratitude and appreciation to those who provide the safety and security he enjoys.” 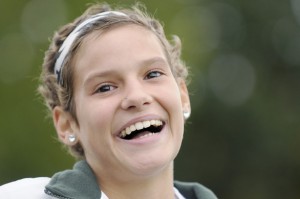 Botteon was a 16-year-old junior at Bristol Eastern and an All-CCC soccer goalie when she was diagnosed in 2009 with acute myeloid leukemia, the same disease that her brother Wade had lost has battle to at the age of 13 in 2002. During her brother’s 11 year fight with the disease Jamie donated bone marrow to her sibling three times.

For six months after being diagnosed Botteon underwent five cycles of chemotherapy and was in and out of Connecticut Children’s Medical Center. The treatment forced Botteon, to put her soccer career and everything else on hold as she fought both for her life and to win the battle her brother was not able to win. Fortunately for Jamie, her family, her friends and teammates Jamie won her fight and was declared cancer free in the spring of 2010.

Jamie worked hard to return to the soccer field with both her premier team and her Bristol Eastern squad. She did so and in 2011 broke the Bristol Eastern record for career shutouts by a goalkeeper. After graduating from Bristol Eastern Jamie went on to Stony Brook University in New York where she iss a member of the Seawolves soccer team. 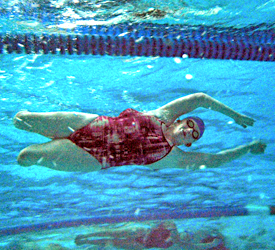 The CIAC Spirit of Sport award was created to honor a student-athlete, coach or team that exemplifies positive sport values while faced with difficult challenges. The award is named in honor of Michael H. Savage, the retiring executive director of the CIAC. The 2010 recipient of the Spirit of Sport award is Rachel Shannon Grusse, a senior at Glastonbury High School. Rachel received the award from Mr. Savage at the annual scholar-athlete banquet held at the Aqua-Turf Club on May 2, 2010.

Rachel was born without a spleen and contracted a form of bacterial pneumonia that required the amputation of both of her lower legs and her fingertips when she was sixteen months old. Despite her physical limitations, Rachel began competitive swimming at the age of ten. She continued her competitive swimming pursuits while at Glastonbury High School where she was a member of the girls’ varsity swim team for four years.

While Rachel was a motivation to others, it was her dedication to her team and sport as well as her work ethic that her high school teammates most admired. Despite severe physical limitations, Rachel never asked for special considerations. Instead she practiced every day with unwavering optimism, determination and enthusiasm.

For her dedication to her sport, her loyalty to her team and a commitment unmatched by many able-bodied athletes, the first-ever Connecticut Spirit of Sport award was presented to Rachel.