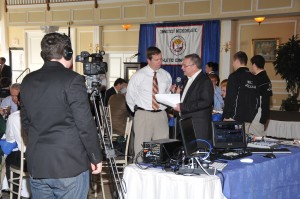 The CIAC appreciates all of the print, broadcast and online media that cover the student-athletes and high school teams throughout the state of Connecticut. The media has an important job to do, and our state media does an outstanding job conveying the great accomplishments across our state. We encourage everyone involved in high school athletics to be friendly and professional in their dealings with the media, and to do whatever they can to help media professionals continue to provide excellent coverage of the games and stories that solidify the importance of athletics as part of a complete educational experience.
CIAC Primary Media Contact
John Holt
Director of Media
(203) 250-1111 x 3936
jholt

Press Releases From The CIAC
Note: The CIAC maintains an e-mail list of media members which is used to send press releases, news and other announcements. This list is for media only. If you are a member of the media and are not on the list please contact John Holt at jholt

CIAC Board of Control Meeting Update

CAS-CIAC To Add Six Distinguished Contributors To Hall of Honor

Basketball Dedication Ceremony To Recognize Eight To Kick Off Tourney

CIAC Board of Control Acts On Berlin Self Report

Nine Inducted Into Inaugural Class of CAS-CIAC Hall of Honor

Seven Individuals To Be Honored At CIAC Basketball Dedication

Program Is Set For 2013 Sportsmanship Conference

No Action Taken Against Wolcott Football

CIAC Makes Adjustments To Schedule Policies Due To Weather

CIAC Scholar-Athlete Banquet Is Sunday at the Aqua Turf

Correction Made In Results of Girls Class L Track Championship

In an effort to provide the best possilble service to the news media, the CIAC has established the following policies in regard to coverage of CIAC post-season events. These policies were enacted in consultation with the CIAC Media Advisory Committee, and are subject to change. Any questions or suggestions regarding these policies can be directed to John Holt at jholt

Media may now obtain an annual media credential to be used for the school year. This pass is for admission to CIAC regular season games and state tournaments events, with the exception of state finals in football, hockey and basketball. Media should contact the venue’s site director/athletic director in advance in order to secure work space at a press box/table. Applications for annual credential must be signed and submitted by an editor/director.

Applications for either championship game coverage credentials or annual media credentials can be made via the “Credentials/Broadcast Forms” tab on this page.

Parking
The CIAC neither provides nor is responsible for media parking at state tournament venues. If the media personnel require special arrangements in relation to parking at an event, those arrangements must be made between the media personnel and the parking venue or site director prior to the tournament event.
Media Entrance Gate
The majority of CIAC tournament sites will have a media pass list at the main admissions gate. The media pass list will be created by the site director in collaboration with the CIAC prior to the tournament event. In all other situations the media will be directed to the “Will Call” window and will be required to present their own media credential.
CIAC Tournament Broadcast Rights/Fees
The digital and TV rights for CIAC Tournament games have been exclusively licensed by the NFHS Network. The NFHS Network has exclusive rights to stream audio and video to the internet for CIAC tournament games. Other entities may only provide audio or video streams for games the NFHS Network has declined.

Mobile video applications such as Periscope or Meerkat may not be used to stream live video during CIAC Tournament contests as it is in violation of the exclusive rights agreement.

Traditional FCC licensed radio station broadcast rights are still available for license from the CIAC for non-declined events. This is for broadcasts that air on a radio station only. Stations are required to disable any broadcast simulcast that air on their website or a “digital stream platform” as part of the rights agreement. Broadcasts that only air on a “digital stream platform” are not permitted as they violate the exclusive rights agreement. Stations are permitted to produce on-line audio broadcasts for declined events.

The following rights fees will be required for broadcasts of CIAC Tournament games for radio and/or television or live streams of NFHS declined games.  Failure to provide rights fee payments may result in prohibiting entities to broadcast future CIAC Tournament games. Championship sites listed below include Divisional and State Open Championships in appropriate sports.

Press Box/Press Table
Passes will be issued to all media members who receive credentials. These passes will allow access to the site press box/press table, and sidelines when designated. Only those reserving credentials will be given passes. These passes are non-transferrable. Every effort will be made to provide all media personnel with adequate seating and work space; however, media personnel must understand that certain facilities in which CIAC contests may be held will have limited seating.
Photography
Only media personnel with credentials approved by CIAC will be allowed to take photographs at CIAC state tournament events. Any photos taken by the media will be used for the sole purpose of print/electronic news coverage. Any media outlet taking photos at any CIAC state championship event with the intent to sell must be preapproved by the CIAC.

A representative from member schools who have advanced to the state tournament are allowed, at their own expense, to take photos at their school’s tournament event. Any photos taken by school representatives will be used for school purposes only and cannot be taken with the intent to sell. School photographers must obtain media credentials from CIAC in order to obtain access to areas designed for the media.

Videotaping
Only media personnel with approved credentials by the CIAC will be allowed to videotape at CIAC state tournament events. Any media outlet preapproved for full game video must provide one copy of video to the CIAC upon request. No unauthorized duplication or sale of a CIAC tournament game tape will be permitted without authorization by the CIAC. Media outlets videotaping for the sole purpose of news highlights on TV or the Internet cannot exceed a total of five (5) highlights per event, and each highlight is not to exceed 90 seconds in length. Areas for videotaping by the news media will be designated by the venue site director.

Representatives from member schools who have advanced to the state tournament are allowed, at their own expense, to videotape their school’s tournament event. Videotapes taken by the participating school representatives will be used for school purposes only and cannot be taken with the intent to sell. School videographers must obtain media credentials from CIAC in order to obtain access to areas designed for the media.

Post Contest Interviews
Due to the limitations of some tournament sites the interviews may be held on the contest field or court. In such instances, all reporters and photographers are to respect the privacy of team bench areas and the official post contest ceremonies. All people are to respect the decisions of the coaches regarding their rights to privacy for post contest team meetings. When possible a person will be appointed to act as liaison between the media and the teams. Team locker rooms are absolutely off limits to any media.
Post Contest Reporting Facilities
The CIAC recognizes the importance of prompt and timely reporting of state tournament results. The site director will allow reporters 60 minutes post game to work on their stories and will arrange for the best possible facilities to accommodate them. Reporters are asked to complete their work in a timely manner since in most cases phone and Internet lines, when available, will be shared.
Championship Media Credentials
Media credentials are issued by CIAC to appropriate persons employed by, and responsible to, recognized media entities. All media must obtain media credentials from CIAC in order to gain admission to CIAC finals and have access to areas designated for the media, such as sidelines and press boxes/tables. A press release will be sent out prior to the finals in all sports that require credentials with the appropriate application links.
Annual Media Credentials
Media may now obtain an annual media credential to be used for the school year. This pass is for admission to CIAC regular season games and state tournaments events, with the exception of state finals in football, hockey and basketball. Media should contact the venue’s site director/athletic director in advance in order to secure work space at a press box/table. Applications for annual credential must be submitted by an editor/director.
Broadcast Application Form
Radio, television and/or internet entities interested in broadcasting CIAC state tournament games on a live or tape-delayed basis must gain approval by submitting a broadcast application form. The appropriate rights fee (if any) must be paid by the entity within 30 days of broadcasting the event. Failure to submit rights fees may result in inability to broadcast future CIAC Tournament events. If online credential applications are being submitted for the event the entity needs to submit that form online so they can be issued the proper credentials.
Linked Up Story Submission Form
CIACsports.com regularly includes feature stories concerning high school sports in its semi-regular feature called Linked Up that are collected by the CIAC staff, but there are likely many stories that are not included. Media entities can use the form below to submit stories for possible inclusion in a Linked Up story.
Local Sports From Connecticut Newspapers
Daily Newspapers
Television/Radio
Weekly Newspapers