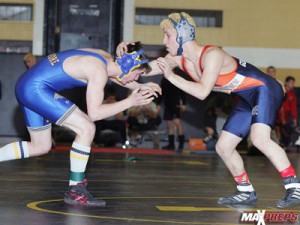 It begins with many runs at the Floyd Little Athletic Center and wraps up with the "Run To The Sun" and the "Road To The Whale." Of course the "it" is the CIAC winter championship season, and it is underway. Thirty-seven teams will lift CIAC championship plaques and there will be stories on those and many others throughout the winter. Linked Up - Winter Championships 2020 will have all the great championship stories and corresponding[...]

CHESHIRE, Conn. – For the first time the CIAC will host a Girls Wrestling Invitational Tournament in conjunction with the CIAC Wrestling State Open February 28-29 at the Floyd Little Center in New Haven. This marks the first CIAC organized event solely for female wrestlers. The Invitational will crown winners in 10 weight classes, and the first, third, and fifth-place matches will coincide with the same matches in the State Open competition. The Invitational seeding and[...]

CHESHIRE, Conn. - Due to the forecast of inclement weather, there have been changes to the schedules for the New England Wrestling and Indoor Track & Field Championships. Competition on Saturday at the New England Wrestling Championships will now begin at 10 a.m. and the schedule will also eliminate all breaks in the competition when possible to expedite the conclusion. There is no change to Friday's schedule. The following are the schedule changes for Saturday’s New England[...]

Schedules for 2018-19 winter sports have been posted on the CIACsports.com site. To view a schedule for any school or specific team, or a statewide master varsity schedule for a sport, visit the main schedule and results page of the site.[...]

Just like that, it's over. Thirty-seven stories and a month or so after it started, the 2018 winter championship season has come to a close. From track to basketball, gymnastics to hockey all the championship stories are right here in one place. Relive another wonderful championship season. Kudos to all the athletes who took part and thanks to the media for covering the championships with aplomb. For those unfamiliar (or simply as a reminder for those[...]

After more than a month and a half, way too much snow, and a lot of great competition the 2017 CIAC winter championship season has concluded. This championship edition of Linked Up features 36 stories of state title winners, and hopefully many more memories those student-athletes will never forget. Thanks for reading along and for all the great media coverage for CIAC championship events that makes Linked Up possible. See you in the spring! For those unfamiliar[...]

Tournament packets for boys and girls basketball, boys ice hockey, girls gymnastics, outdoor track, boys swimming and wrestling have all been posted and are available for download. Tournament divisions for these sports for the upcoming season can be found on each sport's mainpage. Basketball (Boys) Basketball (Girls) Gymnastics Ice Hockey Indoor Track Swimming (Boys) Wrestling [...]

Below is the schedule for the 2016-17 winter rules interpretations meetings provided to CIAC by officials’ organizations and leagues. CIAC rules and regulations require head coaches or their designee to represent your school at these important meetings. Other coaches are encouraged to attend. If your coach cannot make the meeting in your area, I am certain he/she would be welcome at one of the other meetings. If you have any questions or concerns, contact your[...]

WRESTLING COMMITTEE MINUTES September 21, 2015 Present:  Dave Nowakowski, Steve Merlino, Brian Manzi, Pat Risley, Ernest Goodwin, David Green, Bob Swan, Roy Wentworth, Ricky Shook, Ross Sward. The meeting was called to order by Chairman Steve Merlino at 3:30 p.m. The 2015 tournament was reviewed.  There was discussion on the cost at Haddam-Killingworth as well as other costs related to the operation of the 2015 tournament.  There was a considerable variance of costs among the four sites of the[...]

Nearly one month exactly. That's how long it took to crown 35 CIAC team winter champions across eight sports. The first Indoor Track & Field Class title was decided on February 23rd, and after a riveting weekend of competition at Mohegan Sun and Yale, the championships have concluded. Battling snow, cold, and mostly the competition, these champions earned memories that will last a lifetime while capturing the trophy. Here are all the stories for all[...]

Editors Note: CIAC sports committees meet periodically throughout the year, and the meeting reports will highlight relevant decisions or information from the meetings. The CIAC Wrestling Committee met on Tuesday, April 29. The following were a few notable discussion topics and decisions. The Committee addressed significant concerns about the continuing challenge of skin diseases and the challenges it presents to competition. Working to insure the health and safety of all student-athletes in dealing with the skin issues[...]

Remarkable. That is just one of the many adjectives that describes the CIAC winter championship season, which was capped off by an enthralling series of games and meets. The final championship weekend featured three overtime games, numerous records being set, thrilling finishes and incredible team and individual performances. All of the competitors should be lauded for their efforts, and hopefully this now complete Winter Championship edition of Linked Up will help fans and players alike[...]

The issue of concussions and brain injury has been a focus of the CIAC for many years, and with new information coming to the fore, the critical importance of this issue has come into sharper focus. Through its policies and requirements the CIAC has made great effort to protect the well-being of student-athletes. It has worked to empower athletic directors, coaches, and parents by providing the latest information from medical groups and the National Federation[...]

The first two editions of CIACsports.com's look back at the 2012-13 championship moments covered the fall sports season. Check out part 1 and part 2 before moving on to see what is on tap for the best CIAC Network moments of the winter. Despite one of the largest snowstorms in Connecticut history, the winter championship season provided an abundance of memorable moments including the ones highlighted below. WRESTLING: The state Open wrestling competition is a whirlwind of[...]

This edition of Linked Up is admittedly a bit maudlin and sentimental. As this sentence is typed, there is a manhunt going on in the Boston area, in the days following a heartbreaking tragedy. Yet as has been frequently pointed out these terrible events often bring out the best in humanity as people pull together. Similarly, when talented writers tackle the immense emotion in such situations, it produces brilliant and touching pieces of writing. Which[...]

With the focus on postseason games and league tournaments, there was not a ton of feature stories in the Connecticut papers this week. But this is still a link-heavy edition of Linked Up, particularly with a heavy does of national stories. And still some interesting Nutmeg State articles thrown in. From CBSnews.com: This video has been making the rounds on the internet, and for good reason. It is a tremendous example of sportsmanship and the value of[...]

A busy few days of championship action and the closing days of the regular season in girls basketball along with conference tournaments in other sports led to some interesting competition last week. For basketball, we have focused mainly on wins that might help teams earn the qualifying standard of 40-percent and teams in League Tournaments this week. Speaking of the championships, Danbury followed up its Class LL Championship by winning the state Open. The team collected[...]

In the fall, CIACsports.com provided versions of Linked Up that featured the newspaper accounts of various state championships, so readers could quickly find recaps for their favorite team's title (the gymnastics Open link will be added once completed). With the winter sport championship season now in full swing it is time to take a look at the articles written as teams claimed championships in indoor track & field, wrestling and gymnastics over the past two weeks. From[...]

Due to the threat of inclement weather across the state there have been slight changes to the schedules for the CIAC Wrestling Open and the CIAC Gymnastics Class Championships for Saturday, February 23. Competition at the Wrestling Open on Saturday will now start at 9 a.m. with an expected finish around 5:30 p.m. (complete schedule can be found here). The gymnastics meets for class M and S will now be run concurrently at 1:00 at Pomperaug[...]

Because numerous schools have been closed for much or all of this week, all wrestlers will be granted an additional 2 pound weight allowance for Friday's Divisional Tournament competition. For example: 106, which is 108 after Dec 25, now becomes 110 for Friday. Saturday weigh-ins allow for one additional pound due to consecutive days of competition.[...]

Due to the fact that many schools will be out Monday and possibly beyond, the CIAC will be allowing the scheduling of Sunday makeup contests for Winter sports for the remainder of the regular season, providing: Sunday games are mutually agreed upon by both schools Sunday games do not start prior to 12:30 p.m. We hope this change will be helpful to member schools and allow them to complete their regular season schedules prior to the last date[...]

Interesting stories all around the state as January ticks along. Several of the stories deal with coaches making their imprints on their team in significant ways, which is not a surprising revelation, but is always interesting to discover the details. From the Hartford Courant: The Hartford Public/Weaver wrestling co-op seems to be on the way back up. From the Milford Orange-Bulletin: A pair of Amity girls indoor track & field performers are both excelling and looking to break some records in their[...]

Just in time for the holidays, two wrestling teams provided a present for those who appreciate sportsmanship, generosity, kindness and camaraderie. It was not an extravagant gesture, but it was something Jonathan Law (Milford) wrestling coach Matthew Schoonmaker knew he wanted to do. In fact, the idea came to him while sitting at the memorial service for his pupil Jet Dylan Krumweide. Jet died tragically in a kayak accident in late October. As the Connecticut Post[...]