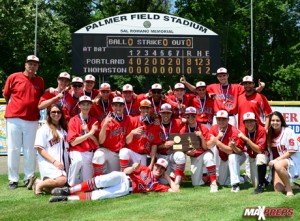 The philosopher Plato had a way with words and knew a little something about numbers, too. Of the latter, he said, “A good decision is based on knowledge and not on numbers.”

Plato’s opinion of numbers applies to CIAC tournament rankings. Teams that play in weaker conferences may end up with a top seed. A team that plays against tougher competition may be seeded lower, but they’re often better prepared for states and knock off a higher seed or two.

The higher seeds generally prevail in the CIAC’s softball tournaments. Twenty-one top seeds have won one of the 64 softball state titles this millennium. Twelve No. 2 seeds won a championship. It’s not often that a double-digit seed wins a state title, which Sacred Heart Academy (Hamden) did as a No. 23 seed in the 2011 Class M tourney.

The CIAC baseball tournament would be the gonzo brother to the softball tournament, as it’s always unpredictable. Softball has had six double-digit seeds win state titles this millennium. Baseball has had that many the last three seasons. Last year was as wild as it’s been for baseball, as teams seeded 14, 22 and 27 won championships.

Click here to read the full story at MaxPreps.com.