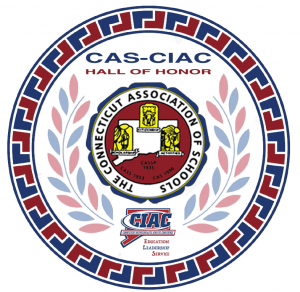 CHESHIRE, Conn. – Seven distinguished honorees will be inducted as the second class of the CAS-CIAC Hall of Honor on October 29, 2016 at the AquaTurf Club in Southington. The seven honorees, Mrs. Katherine “Kit” Bishop, Mr. Robert “Jiggs” Cecchini, Mr. Al Cramer, Mr. Ray Faustich, Mr. Tom Monahan, Mr. Charlie Sharos, and Mr. Ivan Wood were selected for their exceptional service to the Connecticut Association of Schools – Connecticut Interscholastic Athletic Conference. Brief bios of the honorees can be found below. Tickets to the event honoring the inductees are available to the public and can be purchased here: http://casci.ac/1601

Mrs. Katharine “Kit” Bishop was the longtime Principal at Daisy Ingraham Elementary School in Westbrook and was a significant contributor to CAS. She played a major role in the growth of elementary school membership in CAS and served the organization in committees and in leadership positions including a tenure as the chair of the CAS Board.

Mr. Robert “Jiggs” Cecchini has been a vital part of CAS-CIAC in a variety of roles for many years. The former Principal at Suffield High School, he has served as the Boys Basketball Tournament Director among his many contributions and has earned numerous honors throughout his career including induction into the National High School Coaches Association Hall of Fame.

Mr. Al Cramer has been serving CAS-CIAC in some capacity since the early 1970s. As a Principal at Newtown High School he was instrumental in the creation of the CIAC Football Championship while serving as a CIAC committee member, and later joined the organization as Assistant Executive Director. He continues to serve as a consultant to several CIAC committees.

Mr. Ray Faustich has earned numerous honors and accolades as a leader in the officiating community for many years and had a decorated career as a coach and teacher at Trumbull High School  as well as a tenure as the athletics director at Ridgefield High School. He has made significant contributions to high school athletics as a mentor, instructor, interpreter and assignor of baseball umpires.

Mr. Tom Monahan (will be honored posthumously) was a fixture in the athletics community in Bristol for decades and served many valuable roles for CIAC. He was the athletic director for Bristol public schools helping grow the athletics programs in the town and his work with the CIAC included serving as a tournament director, consultant, and committee member.

Mr. Charlie Sharos (will be honored posthumously) was a vital piece of the Connecticut high school athletics scene for decades. A highly-successful soccer coach, he was involved in both the CIAC and Connecticut High School Coaches Association in leadership roles throughout his career including a lengthy tenure as tournament director for the CIAC boys and girls soccer tournaments.

Mr. Ivan Wood (will be honored posthumously) was a teacher, coach, and then Principal at Plainville High School where he spent his entire career. He served CAS-CIAC for more than 60 years as a committee member, board member, and tournament director, and played a key role in the growth of many CIAC tournaments including the girls basketball tournament.