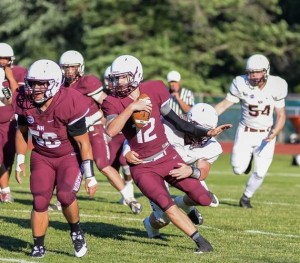 North Haven’s Jack Steinman of North Haven is one small part in a big picture of a high school sports season. Kelley Fryer – The Courier.

Here we go. The 2016-17 season officially gets underway today with the first games of the fall season. What better way to get ready for the season than with a new edition of Linked Up. It’s been awhile since we’ve done one of these, so there are some stories that might be a bit outdated, but we thought they were still worth sharing. Here’s the usual caveat to this piece at this time of year: we try very hard to avoid including traditional team preview stories, as there are so many it’s impossible to include them all. There may be a few stories that lean towards a preview, but they are included if there is a specific feature-story angle to the piece. With that caveat out of the way, check out all these great stories on high school sports, and let’s get excited for a new season.