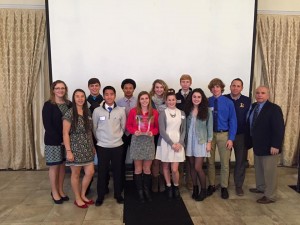 The 15 Michaels Cup Exemplary Programs will be honored at the CIAC Sportsmanship Conference.

The 15 schools represent all six enrollment classifications and are selected based on achievement in seven distinct areas which are sportsmanship, participation, athletic scholarship, athletic personnel, equity, chemical free initiatives and athletic achievement.

“It’s an outstanding achievement for these 15 programs to earn the distinction as an exemplary athletic program given the rigorous selection process,” said CAS-CIAC Executive Director Karissa Niehoff. “These schools have made an impressive commitment to supporting a well-rounded, education-based athletics program and consistently demonstrate the value those programs have to students and the entire school community.”

All CIAC member schools are asked to submit information via a survey for consideration for recognition, and a mathematical formula is used to analyze the data. Schools that meet a statistical threshold are then asked to submit additional information supporting their potential selection. Eighty-one schools submitted data this year, and 34 qualified to be considered for selection with additional information. The CIAC Michaels Achievement Cup Committee reviews the statistical data and discusses the merits of each potential award recipient based on its written criteria, the submitted information, and CIAC compliance.

“The committee members believe this group of 15 schools has gone above and beyond in building and maintaining exemplary athletic programs,” said Beth Smith, Headmaster Shelton High School and Michaels Cup Committee Chairperson. “We are grateful for all the schools that took the time to offer submissions and we had some difficult choices, but the committee believes these 15 programs are absolutely worthy of the honor.”

The 15 schools will be honored at the CIAC Sportsmanship Conference at the AquaTurf in Southington on November 17. The Michaels Achievement Cup program was created in the early 1980s as the brainchild of Roy Michaels, the owner of Michaels Jewelry, in an effort to recognize outstanding athletic programs. The program recognized yearly winners since that time, and then in 2008 transitioned directly to CIAC administration of the program.