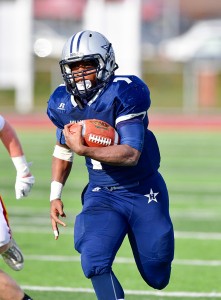 “I felt we put pressure on them defensively and came out in the second half on fire,” Brehon said. “That kind of shocked them and froze them up. We are a second-half team. If you let down, we get it rolling.”

Brehon finished with 3,405 rushing yards for his career and 39 total touchdowns. 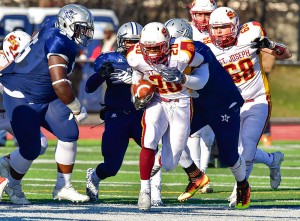 “Ironically, the third quarter has been our best quarter all year, only giving up 14 points,” St. Joseph coach Joe Dellavecchia said. “They are so fast and explosive. It’s real tough. We did the best we could filling lanes. It was a matter of time before they break a couple. We just hoped it wasn’t that many.”

Jaden Shirden accounted for all three touchdowns for St. Joseph in the first half. He finished with 78 rushing yards.

Chase Kinzly caught four balls for 113 yards and had a 91-yard kickoff return for a touchdown in the first half for the Academics.