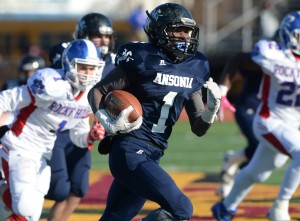 NEW BRITAIN – Though he has many to choose from, it would be hard for Ansonia football coach Tom Brockett to find a state championship as satisfying as the Chargers’ latest CIAC crown Saturday.

Ansonia’s 28-21 victory over Rocky Hill for the Class S championship – the 20th state title in school history – was an immense struggle against a talented Rocky Hill team in just its second playoff and first title game. The Chargers (13-0) trailed 14-6 at halftime and after three quarters. They encountered adversity that may have caused the Chargers to wonder if they were stuck on 19 titles.

A potential Ansonia touchdown pass on the last play of the first half on a possible simultaneous catch in the endzone was ruled a Rocky Hill interception and waved off.

A wide open Ansonia receiver dropped a touchdown grab with the Chargers still trailing 14-6 late in the third quarter.

“We had some adversity and weren’t getting breaks,” Brockett said. “Things weren’t going our way and they hadn’t gone our way the last two years [in the final.]”

But Ansonia squashed any thought of a three-peat Class S title losing streak, scoring three fourth-quarter touchdowns to take a 28-14 lead before holding off a late Rocky Hill rally.

“Everyone expects us to get here every year, but it’s so hard to get here,” Brockett said. “This team has come so far to continue this tradition. It’s night and day from when we started practice.”

Ansonia has relied heavily on the rushing of 2,000-plus yard rusher Markell Dobbs. While the junior had a big day (191 yards on 34 carries), he had plenty of help.

In the fourth-quarter rally, quarterback Bryson Cafaro was paramount. His 33-yard bootleg run sent up Dobbs’ 1-yard TD run to cut the Rocky HIll lead to 14-12 with 10:43 left. Rocky Hill stopped Dobbs on the two-point conversion. 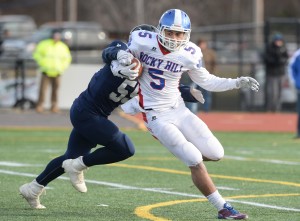 Ansonia got the ball right back, though, when Cafaro’s squib kickoff was recovered by Justin Lopez on the Terrier 26. On 4th and 4 three plays later, Cafaro hit Jake Butler with a 20-yard TD pass with 9:32 left. Cafaro’s conversion run gave Ansonia a 20-14 lead.

Rocky Hill answered thanks to a 31-yard pass from Dan Cavallaro to Grant Nieves, two Ansonia penalties and a 19-yard Cavallaro to Nieves pass for a TD on 4th and 4 to make it, 28-21.

Ansonia recovered the on-side kick and ran out the clock.

Rocky Hill coach Mark Fritz had no regrets. He lauded his team’s defense, figuring limiting Ansonia to one score would be a daunting task. Ansonia’s size advantage came into play in the second half as it wore down the Rocky Hill defense.

“We lost two fumbles and didn’t recover the onside kick,” Fritz said. “You can’t give a great team like Ansonia extra possessions. But I’m so proud of my guys. We had a great year and played Ansonia tough. We’re very similar in that we run the ball and play solid defense. This game could have gone either way.”

The first half ended with controversy. Cafaro’s pass in the endzone to Butler was caught by both Nieves and Butler. Officials ruled it an interception, though Brockett argued it was a simultaneous catch and touchdown.

“Rocky Hill is a great team,” Brockett said. “Whatever sportswriter doesn’t vote them in the top 10 really has to be questioned.”