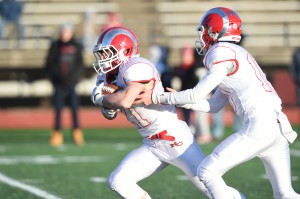 NEW BRITAIN – Senior Ryan O’Connell ran for a touchdown, caught a touchdown pass and made eight tackles as No. 2 New Canaan defeated No. 1 and previously unbeaten Windsor 35-20 to win the Class L championship Saturday at Veterans Field.

It was the fourth straight title for the Rams (12-1) and 12th overall, all under head coach Lou Marinelli who tied former West Haven coach Ed McCarthy for the state record for wins with 322.

New Canaan was playing in the final for the 10th time in 11 seasons. The Rams haven’t lost to a team other than Darien since the 2012 Class L semifinals vs. Windsor. New Canaan’s only loss this year was to Class LL champ Darien.

With the score tied at 14, O’Connell caught a 26-yard touchdown pass from freshman Drew Pyne to give the Rams the lead for good with 1:32 left in the first half.

“It’s unbelievable, I can’t put it into words,” O’Connell said. “It’s something that I dreamed about growing up. It’s fantastic, I am so excited. I am at a loss for words.” 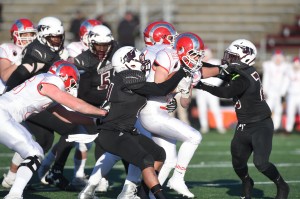 Pyne completed 10 of 13 passes for 137 yards and two touchdowns. Pyne threw an 8-yard touchdown pass to Graham Braden in the first quarter. Teddy Hood scored on a 2-yard run, O’Connell scored on an 11-yard run and Grant Morris kicked field goals of 31 and 21 yards for New Canaan.

Jahkari Grant scored on a 12-yard run and he threw an 8-yard touchdown pass to Tim Gardner for Windsor (12-1). Gardner scored on a 1-yard run to help tie the game at 14 in the second quarter. Jason Pinnock caught seven passes for 73 yards for the Warriors, who are now 1-3 in state finals.

O’Connell finished with seven catches for 94 yards. Braden ran for a game-high 186 yards on 24 carries.