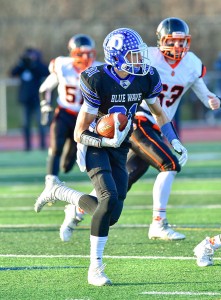 The Blue Wave didn’t need to, either.

Timothy Herget had two touchdown catches and two interceptions and Quinn Fay had four of his team’s eight sacks as top-ranked Darien routed No. 7 Ridgefield, 28-7, to win its second straight LL title.

The Blue Wave’s defensive line of tackles Justin Plank and Andrew Stueber and ends Cord Fox and Fay had their way with Ridgefield and were the difference in the game.

“That was the best defensive line (play) that we’ve played all year,” Fay (seven tackles) said. “Everyone had at least one sack.”

It was the sixth state title for the Blue Wave (13-0). They were ranked No. 1 in The Day of New London state coaches’ and GameTimeCT/New Haven Register and Hartford Courant media polls all season and will finish first for a second-straight season.

Brian Peters completed 17 of 31 passes for 237 yards with three touchdowns and two interceptions for the Blue Wave. Herget had four catches for 91 yards along with his two scores.

Finlay Collins ran 25 times for 166 yards, had five catches for 28 yards and a score, and had six tackles (all solo) with a sack for Darien. Nick Green also scored on a 61-yard interception return.

Peters threw a 14-yard touchdown to Collins on the Blue Wave’s first drive to go ahead, 7-0, just four minutes, 18 second into the game.

Fowler completed a 62-yard pass to Longo on Ridgefield’s first play of the game to give it first-and-10 at the Darien 15. 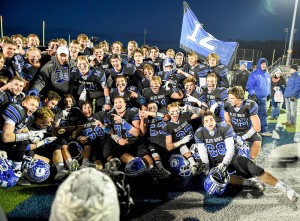 Fox (four tackles, one sacks) dropped Fowler for a 2-yard loss on first down. Herget followed with an interception.

The Tigers had first-and-goal from the Darien 5-yard line on their second drive. Fay sacked Fowler for a 9-yard loss on second down, and Michael Neary followed with another sack for a 4-yard loss.

“Your margin of error against this team is very, very slim,” Ridgefield head coach Kevin Callahan said. “We felt their wrath because we couldn’t do what we had to do.”

Peters hooked up with Herget for an 11-yard touchdown as Darien went ahead, 14-0, with 46 seconds left in the first half.

Herget took a short inside pass from Peters and zigzagged for a 65-yard touchdown to push the Blue Wave’s lead to 21-0 with 8:14 remaining in the third quarter.

The Tigers tried a receiver screen on third-and-1 at the Darien 36. Green timed up the throw perfectly and picked it off for a 61-yard interception return.