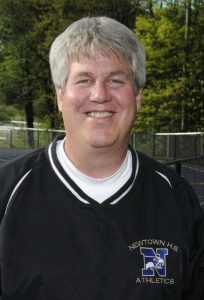 CHESHIRE, Conn. – Gregg Simon, longtime high school athletic administrator, coach, and teacher, has been selected from a pool of highly qualified candidates to join the CAS-CIAC staff as the Associate Executive Director of CIAC effective July 1.

Simon will assume the Associate Executive Director role which reports directly to the CAS-CIAC Executive Director and which plays a critical role in the daily administration and operations of the CIAC. He will be responsible for among other things administration of CIAC sponsored sports, organization of CIAC meeting schedules and agendas for CIAC Board of Control and sport committees, and management of communications with member schools relative to adherence to CIAC policies and procedures and day-to-day questions in collaboration with the Executive Director and assistant directors.

“We are thrilled that Gregg will be joining the CAS-CIAC team; he brings a wealth of essential experience and knowledge to the position,” CAS-CIAC Executive Director Karissa Niehoff said. “We are confident that Gregg will utilize his vast personal connections and genuine passion for the work to lead CIAC through a smooth transition and help to the guide the organization going forward.”

Simon joins the CIAC after a highly-successful 17-year tenure as the Director of Athletics at Newtown High School from 1999-2016. He oversaw an athletic department that sponsored every CIAC sponsored sport and included more than 80 coaches and volunteers. Newtown’s athletic department grew significantly under his leadership, including adding four new sports during the last five years of his time as well as launching and maintaining a Unified Sports program that is one of the largest in the state. The athletic program was recognized with numerous awards during his time as AD including as a Michael’s Cup Exemplary Program for the 2013-14 school year.

“I am excited to assume the position of CIAC Associate Executive Director and to work for this incredible organization,” Simon stated. “I understand that I have huge shoes to fill with the outstanding job that Steve Wysowski has done over the last three years but I look forward to the challenge. I love high school sports and believe this passion should be a requirement for this job and think my experience working with CIAC, CAAD, and the CHSCA will allow me to have a firm understanding of the concerns of all the stakeholders in Connecticut high school athletics.”

Along with his work at Newtown, Simon was highly involved in leadership positions both within the school and in outside organizations. He served in several leadership roles for both the Southwest Conference (SWC) and Connecticut Association of Athletic Directors (CAAD). He served on the CAAD Executive Board from 2010-2015 and had eight and 10-year stints on the SWC Athletic Executive Board and Athletic Director’s Administrative Committee respectively. He also created and chaired the Newtown High School Athletic Department Parent Advisory Committee.

His efforts on behalf of Newtown’s student-athletes earned him many professional honors throughout his career. He was awarded the National Interscholastic Athletic Administrators Award of Merit in 2013 and the CAAD Service Award in 2015. His work at Newtown was also recognized with the creation of the “Founders Award” which is given in his name each year to a Newtown Unified sports partner and athlete.

Simon graduated from Central Connecticut State with a degree in Social Studies and Secondary Education and earned his Master’s in Educational Leadership from Sacred Heart University. Along with his work as an athletic administrator he was a decorated coach for the Newtown girls basketball team from 1991-2004 and worked as a social studies teacher first at the St. Ambrose School in Bridgeport and then the Newtown Middle School for 13 years.

He joins the CAS-CIAC staff replacing current Associate Executive Director Steve Wysowski who is retiring from the position at the end of June after three years with the central office.