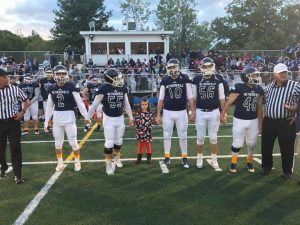 The idea that high school sports are about more than wins and losses is often mentioned but for teenaged students in the midst of a competitive season it’s easy to lose sight of a bigger picture. This season, the wins and losses have not gone the way the Wethersfield High School football team like, but the presence of a brave little girl has helped the entire football family see the bigger picture.

Like many, many schools and teams across Connecticut the Eagles and their fans have raised money for various causes over the years. As the calendar turned to October fans will see the color pink begin to appear on athletic fields and venues everywhere as awareness and money is raised in the fight against breast cancer. When Connie DiGiacomo became president of the Wethersfield football booster club she had a specific illness in mind to focus the energy of the team and its supporters. Then, this year, that focus got a specific face and a new specific goal.

The general target was raising funds and awareness around childhood cancer. The specific face was Maven Borgen, a first grader at Charles Wright Elementary School in Wethersfield. Last spring, she was diagnosed with an extremely rare and aggressive form of brain cancer (DIPG). 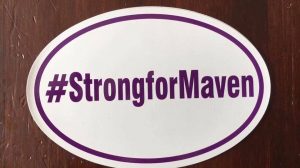 So now the team and its fans had a face to go with the cause. A little girl who began treatment at Connecticut Children’s Medical Center but whose disease is so rare that treatment options in this country are limited, so she is now traveling to London every three weeks for treatment – which is not covered by insurance. 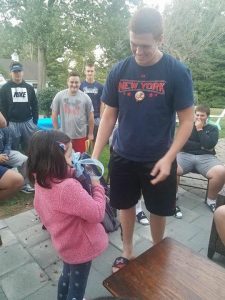 Now the team and its fans had a cause it could rally around and help keep some perspective beyond the wins and losses. Maven joined the team for the coin toss for its season opening home game against Middletown. Her family set up a table at the team’s two home games in September selling #StrongForMaven car magnets, and the booster club donated 10% of the concession stand profits to support her treatment along with having a collection jar available for donations at home games. The Eagles have also been wearing gold laces and gold socks donated by a Wethersfield family that also lost a family member to childhood cancer as a means to awareness.

And despite a hectic and exhausting schedule while battling her disease, Maven and her family joined the team at its pasta dinner the night before its home game against Platt on September 29 – a game that turned out to be the first win of the season for the Eagles.

All told the boosters raised more than $1,000 for Maven and her family through its efforts. Perhaps more importantly was the support and community for the family, and the perspective provided for a group of young men and their families.

“Their [the team’s] hearts went out when they saw her, they know her story, and I want them to realize there are more important things in life and I think they got that,” DiGiacomo said when describing how the team has reacted to Maven’s involvement with the team. “We have invited her to join the team at any home game and we are trying to help them with whatever we can do.”

Though the team’s specific fundraising plans were tied with childhood cancer awareness month in Sepembter, Maven’s GoFundMe page is still available here:  https://www.gofundme.com/cancer-free-life-for-maven and the relationship between her and the team will continue throughout the year. It’s a relationship that has been a win, regardless of what record the Wethersfield football team ends up with on the field.