If you want to see what kind of impressive athletic feats high school athletes can achieve just check out the many CIAC championship events that conclude each season. If you want to see what amazing things high school leaders can achieve off the playing field in tackling issues of sportsmanship, the CIAC Class Act School program adopted by schools across the state provides a great venue for student leaders to show what they can do. That was never more apparent than when a handful of students from Killingly High School decided to take the inspiration of their own Class Act program to their league, resulting in the highly-successful student-planned and student-executed Eastern Connecticut Conference Class Act Leadership Team Summit.

One hundred seventeen students and administrators representing 18 current and future ECC schools attended the event on November 30. Each school brought five members of its Class Act Leadership Team (CALT) along with its athletic director.

Killingly senior Zach Schena and his fellow members of the Class Act Leadership Team were the driving force behind the event, having been spurred to action by the desire to see the program that had been a hit at Killingly grow within its league.

“Right after the CIAC summit earlier this fall, we saw the sheet that only had a couple ECC schools on it that are part of the Class Act Program,” Schena explained. “I know we’ve developed it pretty well here, and we wanted to try and find a way to get everyone else involved because it’s just a good program that can actually promote sportsmanship successfully.”

The stated goals of the summit were pretty straightforward. The students wanted to see more ECC schools choose to accept the mantle of being a Class Act School, and they wanted to provide tools and share best practices from the current Class Act Schools to encourage the program’s growth. Simply by those metrics, the Summit was simply a smashing success. Prior to the event, four ECC schools had opted in to the voluntary Class Act program. Afterwards that total rose to 14 and the hope is that all 17 league members will be on board by the close of the school year.

“I think sportsmanship is a good way for our league to tie together more,” stated Killingly senior Stephen Wetherell who was another Killingly CALT member involved in the planning and execution of the event. “I’ve already seen on the basketball courts, I’ve already seen people from different schools get more connected through sportsmanship and then they have friendships that don’t only last on the court but off the court and then possibly throughout life. That’s what sports are about, establishing relationships and having a good time.”

The numbers, increased participation, and enthusiasm are great and reflect well on the students who took the initiative to push the issue forward. That’s a tangible impact from the work of the leaders who put it together. 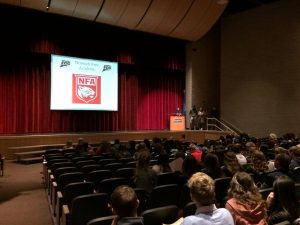 Yet it may have been the intangible benefits that emerged from the event that spoke to what can happen when students are given the freedom to lead themselves and each other. The portion of the Summit that most resonated was an open discussion period where everyone in attendance was given the opportunity to share their their thoughts and feelings on the Class Act program, on sportsmanship challenges in general and specifically within the Conference. It was an open, honest dialogue that gave students the chance to ask serious questions and talk about serious topics without being restricted by the adults in the room. In turn the school administrators also took the opportunity to share their opinions directly with the students.

“The most powerful part of the summit as I watched it was the question and answering part,” Killingly Athletics Director Gene Blain noted. “They had created 10-14 questions that were open ended around sportsmanship and leadership. Every single school participated at multiple levels — it was kind of cool. The fact that it was specific to our league led people to want to talk about it and again have ownership of it because it’s our league we should be proud of it and we should be wanting to improve it and make it better.”

In the end, is that kind of open, honest dialogue between adults and students, and perhaps more importantly between students from different schools going to solve all the sportsmanship challenges that may exist within a sports league or at a particular school? Very doubtful. But giving the leaders the opportunity to share their thoughts and concerns — as well as their successes — and build relationships can only serve to help move the ECC forward.

Schena felt strongly that what was accomplished at the summit, was largely due to the fact that it was the students who took ownership, and the lead in making the event happen.

“That’s what the whole summit was based around — student led. We didn’t want to have just another AD talking down to us as athletes, we wanted to speak freely to each other. We sit and listen all day at school, why should we have to sit and listen when it comes to sports? I think that was a huge success.”

Sportsmanship in the world of high school sports is always going to be a tricky needle to thread. The combination of emotional and occasionally immature student athletes and fans, along with equally emotional parents and coaches is always going to be volatile. Often efforts to combat sportsmanship issues are reactive — dealing with a mistake in behavior after it happens — rather than proactive. What the success of the ECC Class Act Leadership Team Summit shows is that even if the problems appear daunting, one of the best ways to tackle them is to utilize the perspective, energy, and expertise of students.

“The most powerful part of the whole program is that it’s student run, it’s student generated,” Blain said.” So if you’re a student and you want to get involved in a program that is going to allow you to have a say in the direction it takes and what the end product is then this is a program for you. There are a lot of kids out there that are student athletes who are great leaders and have a lot to say, and having a program that empowers them to do that is great and something they should get involved with.”

“The most important question of the whole thing was what’s the next step,” Wetherell added. “We are here now, what can we do to improve? Definitely a great leadership program, you have all these kids that are leaders on the field but now you’re leading this thing on your own – it was fun – it was a great experience. I think other kids should have the opportunity because it’s great skills you can take with you after high school. It can turn into a really fun experience and it’s a great cause too at the same time.”

It was desire to tackle sportsmanship challenges head on and the great leadership and commitment of students that led to Killingly being one of the early adopters of the Class Act Schools initiative. And it was their continued belief in the program and the impact it made at their school that sparked them to want to see it expand across the ECC. The students felt it was important, and so the students planned the Summit. The students were responsible for the event and ultimately for its success. Empowered by the Class Act Program and its administration to be creative and responsible in addressing sportsmanship concerns in its own building, the students carried that confidence into trying to spread the good feeling around.

Sportsmanship can be an overwhelming topic and trying to find real solutions for a school or a league can seem like an insurmountable challenge. The same was true for Killingly’s Class Act Leadership Team, but a motivated group of students decided to accept the challenge.

“Getting started is the hardest part so when we first came back from the summit two years ago, we sat in this room and looked at each other and said ‘we all play sports, we all see it, what do we want to change?’” Schena explained. “We wanted to try and promote that as much as possible in the community. We like to keep our meetings really free form where anyone can really speak on any idea that they have so we just kind of put it all out there and see where the cards fall.”

Blain also feels strongly that just getting started will pay dividends for schools, and then let the students take it from there.

“That’s probably the biggest step for schools to get started is just having that initial meeting because once we had that initial meeting, and even before that I knew, this was going to be their [the students’] group. They made me look really good because I’ve done very little, I’ve just sat back and let them take charge and kind of do the things that have been so successful and for me that’s the most gratifying part.”

Just get started, and try things. It’s advice that can have a lot of applications, but for schools or leagues looking to address sportsmanship challenges its an approach that could lead to some positive results. Especially when schools trust and empower its students to take the lead.