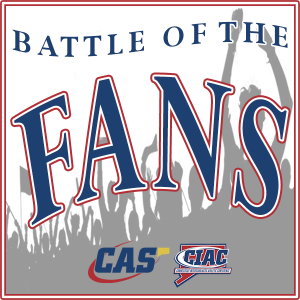 The submissions have come in for the 2017-18 CAS-CIAC Battle of the Fans competition, and among the many great entries, a pair of finalists have been chosen. Congratulations to Immaculate High School and Norwich Free Academy which have been selected as the two finalists. CIAC staff members will visit each school to talk with student-leaders and administrators soon as well as watch the student sections on game day, and then the 2017-18 CAS-CIAC Battle of the Fans winner will be announced on March 9.

Of the submissions these best represented the criteria of CAS-CIAC Battle of the Fans which is to encourage positive fan behavior from school student sections and highlight the great things schools are doing to promote sportsmanship and supportive fan conduct. It’s not just about having the rowdiest fans, the videos and entries should highlight the school’s commitment to positive sportsmanship, and school spirit. This is Immaculate Stable’s second-straight year as a finalist, while NFA earns finalist status in its first year submitting an entry.