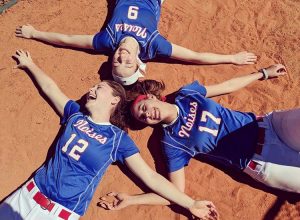 Emily Bushnell (#17) has come a long way to her role as senior captain for Hale-Ray softball and volleyball. Provided by Hale-Ray Athletics.

Nathan Hale-Ray High School in Moodus checks in as one of the smallest public high schools in Connecticut with its total of 337 students ranking 167th out of 188 CIAC member schools.  Being a small school, however, does not guarantee immediate athletic success for every student that walks onto the court and the field.

Emily Bushnell can tell you that. Now she’s a senior captain and leader for the softball and girls volleyball programs at Hale-Ray — two of the school’s most consistently successful programs. That was not the case early in her high school career. Then she was just working to earn consistent playing time on the school’s junior varsity teams.

“Freshman year I got very little to no playing time on JV but I never wanted to stop playing and I didn’t want to give up. I’ve worked really hard to be where I am today.”

Where she is today is a great example of where hard work can take you, and a stellar representative of a strong all-around student-athlete for the Noises. 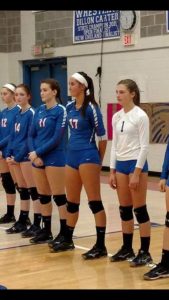 Bushnell (#17) has been a leader for very strong Hale-Ray girls volleyball team. Provided by Hale-Ray athletics.

“She is a role model for our underclassmen,” Hale-Ray girls volleyball and softball coach Suzy Miner explains. “One who inspires younger student-athletes to be resilient, hard working, and confident.”

Hale-Ray athletics director Marty Ryczek puts it simply, “as a four-year member of our two most successful programs, she projects all the qualities we hope to find in a student athlete. She is very outgoing and a pleasure to talk to.”

What qualities, exactly does she possess? Starting with the obvious, she’s played a key part in some of the most successful teams in school history. Hale-Ray girls volleyball won consecutive Shoreline Conference titles her sophomore and junior season, and reached the CIAC semifinals and finals respectively in those seasons. In her senior campaign as a captain the team posted a record of 14-6 and reached the Shoreline semifinals and the second round of the CIAC tournament. In softball the team has gone 28-12 in the regular season in her two years and made an appearance in the Class S quarterfinals last season.

“Admittedly, Emily is not the most skilled athlete on her teams, but what she is lacking in skill set, she more than makes up for in her passion for her sports and her teammates,” Miner says. ”

Now in her senior year she served as captain and leader for both programs. Bushnell has also demonstrated strong work in the classroom matching her work ethic in the athletics venue.

“I think my athletic director chose me as a representative of a high school student-athlete because not only do I work hard on the field but I also work hard in the classroom.”

“[Her] growth has not only been present on the field or on the court,” Miner says. “Emily has found herself as a leader in the classroom, dedicating herself to building her skills and advocating for herself.”

Whether on the field and court or in the classroom there’s no question Bushnell displays those special qualities Ryczek extolled. Perhaps her individual athletic achievements haven’t risen to a level of a lot of personal individual awards or even . Yet thankfully there are students like her in every high school program in the state. Students who excel in all areas and and seem to develop a knack for doing the right things all the time and who understand the big picture. Simply put, student-athletes who “get it.” And Bushnell is one of them.

Whatever the question about her high school athletics career, and what it means, she has a compelling answer.

On what she will take away from her high school athletics career: “the friends and memories I’ve made on the court and on the field will last a lifetime.” 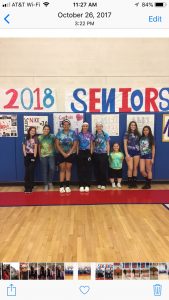 Now in her senior softball season, Bushnell continues to be a big part of her teams. Provided by Hale-Ray athletics.

On the benefits of high school sports participation: “I think the biggest benefit of high sports is the life lessons you learn and the family-like atmosphere you create with your teammates.”

Or finally what makes participation in student activities unique: “I would share that being involved in high school sports programs will teach student-athletes life lessons that can’t be taught in a classroom.”

These answers might as well be put together in a brochure extolling all that high school sports participation has to offer.

That level of perspective and awareness isn’t necessarily easy for a high school student. Fitting then, that Emily Bushnell was able to express ideas like that. Miner puts the point on it best, describing how the exceptional product visible to Hale-Ray fans now became that way through a tremendous amount of work.

“She has gone from a very immature student-athlete to a coachable, trustworthy, giving teammate who puts her team first before herself.”

Her high school athletic success often isn’t easy, but for those who persevere and are willing to put in the work, that can make the rewards of success all the sweeter. That path was a tough one for Emily Bushnell, but thankfully for the Hale Ray Noises, she has found all the right answers.