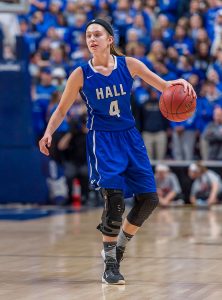 Amber Raisner felt the the sensation and knew. She had been around sports enough, and had enough conversations with other athletes to know what that feeling meant. What she didn’t know was how this would impact the remainder of her high school career, or her dreams of continuing it at the college level.

“…One part of my leg went one way, the other went the other and I collapsed and at that moment, I yelled ‘I tore my ACL.’ I knew right away. I was still in my AAU season so obviously that came to an end. When I started after my surgery and all this, I was like oh my goodness, like my senior year, I’m not missing my senior year… this is insane, that can’t be happening, we worked too hard and we were gonna be very competitive this season.”

Not surprisingly for an athlete with Raisner’s determination and commitment, what could have been a roadblock became merely a speed bump. In fact, it resulted in just another chapter in what was already a compelling high school sports story, and became even more compelling as she went on. Now on Sunday, she will add one more compelling chapter when she is honored as one of the two Scholar Athletes from Hall High School, joining 348 other stellar senior student athletes.

The book is compelling because Raisner’s high school athletics career contains multitudes. It is almost like a “choose your own adventure” of feature story topics.

The talented senior leader who helped carry her team to nearly unprecedented heights? Check. The 3-sport athlete in an era when those are supposedly a thing of the past who showed no interest in abandoning a sport in pursuit of college athletic dreams? Yep, that too. An athlete who saw her dreams momentarily paused by a significant injury only to come back sooner than expected without missing a beat? Yes indeed. Even a heartwarming story with a high school career serving to help bring extended family together. Remarkably it has that too.

Start with the sports participation because that offers a clear look at the mindset driving her to Sunday’s awards banquet. Basketball was the top dog, the first love and the primary focus, but it was not the sole focus. Starting high school it was soccer, basketball, and tennis that kept Raisner involved and competitive throughout the school year. Then for her junior season, a fortuitous switch to the swim team in the fall while maintaining the others.

“I kind of embraced that idea of how I don’t need to give up all of my sports and you’re working different muscles for every sport and you’re meeting new people so…I just figured I might as well continue all of the different sports that I loved.”

No fears about not reaching her potential or goals of taking her basketball career to college by not focusing only on basketball? Or a worry of burning out by being that active while also adding AAU basketball during the spring along with the type of academic workload that helped Raisner earn Scholar Athlete status?

“I’m the most competitive person so I just, everything I do I have to give 100-percent so I knew that doing multiple sports wouldn’t have taken away from basketball because I still give 100-percent in that as well. I never played a sport that I didn’t want to play, I was never forced into playing certain sports, it was always which ones do you enjoy the most which allowed me to really have the most fun with it.”

Fears and worries took on a different shape in the summer prior to her senior year, the moment she felt the pop. With doctors confirming what she feared — a torn ACL — now Raisner’s work ethic and perspective would be put to a different sort of test. 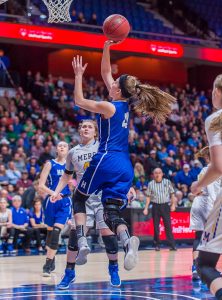 “I heard people in my ear saying you should just get stronger for college, you don’t want to risk it because a typical ACL recovery is anywhere from six months to a year, or it’s actually, it’s nine to 12 but people can push it to six. I did my physical therapy seven times a week every day and I went to physical therapy during my free period during school…I would drive to physical therapy and just work out and do my exercises and just to make sure that my knee was getting stronger.”

If doubt or questions of what this might mean for her athletic future ever crept into Raisner’s mind, they were quickly swept away by the focus and dedication that helped her achieve so much prior to the injury.

“People that were in my ear kind of saying you don’t want to push it were either other people that went through the process [before] or people that didn’t really know me and my competitive spirit and once I put my mind to something like I’m getting it done.”

While many high school athletes might focus on the missed opportunities arising from a serious injury, Raisner adopted the perspective that things happen for a reason. Her switch to swimming the previous year paid immediate dividends as that was a sport she could compete in almost immediately while still rehabbing her injury. And while the injury kept her from competing in basketball for most of what is a critical evaluation period, it led her to a decision to attend Union College where she will play basketball. It was a school that was barely on her radar prior to the injury, but one that now feels like a perfect fit.

After easing back into competition in the fall, one big goal remained; a return to the hardwood for her senior basketball season. Just six months or so after the injury that could have put an end to her high school career, Raisner was back on the court. It was slow going for both her and the Warriors in the early season as she was on a tight minutes restriction and the team came out of the gates slowly with a 2-2 record.

“I remember four days after my surgery when I was in like a full lock leg braceand I was doing ball handling drills and shooting outside and just, and doing like two balls handling in a chair because I couldn’t even walk. It was just so good to be out there and to not only be watching my team but I knew we could do great things.”

From there, it was all upswing as Raisner was back to her old self, helping the team to a 17-3 regular season mark, and then a postseason “Run to the Sun” to remember. That run was punctuated in a wild Class LL semifinal game that turned out to be the season in microcosm. Hall fell behind CCC-rival Enfield by a 16 points in the first quarter, only to rally and ultimately prevail in overtime, earning the program’s first trip to a CIAC girls basketball final in more than three decades. Raisner led the team with 15 points in the semifinal win and had a pair of late fourth-quarter baskets.

“Coach Brett said ‘guys, you have the ability to be 2-18 or 18-2 and it’s whatever you guys make of it.’ So that was kind of the switch and all of a sudden when we started doing better and playing more as a team, we obviously started winning and we were kind of that dark horse team that no one thought was gonna keep advancing.”

Though the dream season ended with a loss to top-seed Mercy in the final at Mohegan Sun it didn’t diminish the experience for Raisner or her teammates.

“The ride it was incredible, we gave it all we could and they were, we were outmatched to a lot of our positions. We started down at the beginning and we could have stayed down but we continued fighting back and brought us to Mohegan Sun, single handedly the most incredible basketball experience that I ever played at.”

From there it’s just been another basic chapter of this remarkable story. She’s back on the tennis courts this spring, with a knee brace the only reminder of the injury. And because one sport never seems to be enough to satisfy, she still heads to the basketball court after wrapping up the day of tennis for another season of AAU to stay sharp for her college career. 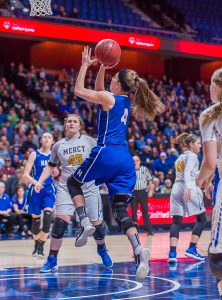 All of that, and she still found the time to excel enough in the classroom and other endeavors to be recognized as Hall’s female CAS-CIAC Scholar Athlete, and also to earn a scholarship from the Connecticut High School Coaches Association.

“I knew about the award just through her last year and so I was super honored to be the recipient this year. I won another student athlete type award [High School Coaches Association] and it was two female recipients and two males in the State of Connecticut for student-athlete, like Scholar Athlete Award so I was just, both of these awards were just so, you have to work hard in both the classroom and on the sports field and also involved in community service too.”

As for the heartwarming story about her high school career helping to bring the family together? It’s just another little sweetener in a story that was already plenty sweet. Her extended family includes six grandparents (through remarriages) which led to some contentiousness at her contests. But the desire to be a part of Raisner’s compelling career won out, and now all six grandparents have been fixtures at Hall games as some of the most ardent supporters, and are already making plans to carpool together for trips to Union next winter.

All of this, the three-sport competition, the leadership and performance in basketball, the determined injury recovery, and the performance in the classroom is what CAS-CIAC hopes to honor with the Scholar Athlete recognition. It’s celebrating the seniors who have done it all, and excel in doing it. They may not always be the top athlete — though many are — but they’ve left a legacy of commitment, excellence, and success that is indelible and deserves to be honored.

“At first I was shocked, I was like this is amazing. I did all of these things but shocked because people were recognizing it so if you always know what you do but you’re not sure if other people also recognizing that so, after I was, all the surprise wore off, I just felt so honored to be recognized. There’s small awards you can get for either sports individually or academics but just the combination of all of it really just, I realized who I am or who I feel I am as a person.”

Though Raisner’s high school career is not yet complete, her selection as Hall’s female Scholar Athlete is a fitting note for the last chapter of her high school success story. And what a story it has been.