CIAC Rewind – Why Choose One? 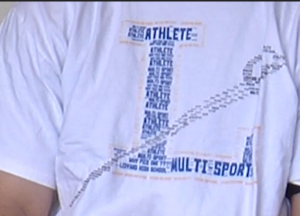 Ledyard High School Athletic Director Jim Buonocore thinks the wrong question is being asked. Nearly everyone associated with high school sports in this era bemoans the fact that most high school athletes don’t play three sports anymore, or at least asks the question of why that is the case. As Buonocore looked at the athletic landscape for Ledyard and made the decision to tackle this topic head-on he decided to appeal to Colonels athletes by framing the question differently; “why play just one?”

The logic is pretty straightforward. If participation in extracurricular activities has all the benefits that are often promoted by schools and the CIAC, then the best-case scenario would be for students to experience those benefits in as many seasons as possible.

“To open up your variety of sports to more than one, really tests your limits, which I think people need,” explained Ledyard junior Caden Foote who competes in football, wrestling, and outdoor track & field. “[It] makes you balance a schedule and set priorities, which I think is really important in high school.”

Yet for a variety of reasons, anecdotally at least, fewer high school athletes are choosing to participate in high school sports for all three seasons — in particular some of the top athletes. Buonocore saw this trend at his school, and worried that it could lead to a downturn in competitiveness, or in the worst case scenario, the cutting of programs. With that in mind he decided to take action. It’s action that any school or administrator could take if they chose to tackle this challenge and not accept the decline in the participation numbers as a fait accompli.

Relatively speaking, his plan is still in its infancy, but the results have begun to show. In 2016 when he began the emphasis, 72 athletes were competing for Ledyard in all three seasons. Following the 2017-18 school year, that number is up to 87 athletes that participated in three sports. Modest growth, but growth nonetheless, and something to which Buonocore can point to highlight the success of his initiative. With some data showing the program’s success, and an understanding of the “why” the school’s 3-sport athlete program began, it is time to focus on the “how.” How did Ledyard approach building its roster of 3-sport or multi-sport athletes, and is it a model that could find the same level of success at other schools?

Buonocore recognized in order to see the sort of rise in three-sport participation that he desired there were three groups he would need to convince of the merits of his plan: the athletes themselves, their parents, and the school’s coaches. Armed with data, anecdotes, and more, he prepared a powerpoint and made his pitch to the athletes and parents at his seasonal athletics department meetings. Knowing that different elements would appeal to different groups, he attempted to provide specific information targeted to specific audiences. For the athletes, a pitch designed around the notion that participating in more than one sport isn’t just good for Ledyard, it is in their best interests as well. 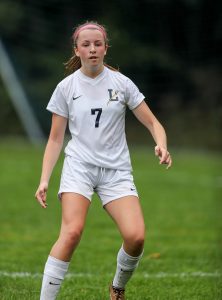 Buonocore cited articles and trends showing that college coaches prefer recruiting multi-sport athletes, and then also created awards at the school to highlight the most accomplished three-sport athletes. For the parents, he used that same draw of the possibility of moving on to compete in college, but also highlighted data indicating that three-sport athletes traditionally have lower injury rates than athletes that specialize in one sport.

Finally came Ledyard’s own coaches. Getting buy-in from his own staff was a critical step in the process. Coaches who either overtly or subtly discourage athletes from participating in other sports when out of season would be a significant obstacle to seeing Colonel athletes explore multi-sport options. Fortunately the Ledyard staff universally got onboard and not only does not serve as a deterrent for multi-sport participation, but encourages it with their athletes when given the opportunity.

“Coaches are encouraging,” Buonocore stated. “Coaches take pride in their athlete playing another sport and producing, and having success. I’m seeing that now, and that’s a huge first step.”

From there it was a matter of hammering the message home often and with different audiences. If this is truly something important to the school that will benefit the athletes, it’s worth continuing the push by repeating the pitch and supporting those who have chosen to expand participation. That is how an idea can take hold and become part of the culture at a school. So Buonocore continues his efforts with presentations at all of his seasonal meetings with athletes and coaches, and when he speaks to middle school students before they enter Ledyard High School he encourages them to not limit themselves to a single sport as well.

Finally there is a recognition component to the growth of Ledyard’s three-sport participation. In the initial year of the program, all athletes that competed in three sports were given a t-shirt recognizing the accomplishment. The following years, one female and one male student-athlete from each class are honored at the end-of-year sports award ceremony as the top three-sport athlete. It has become a coveted and highly sought-after award, as the student-athletes at the school embrace the notion of greater participation. 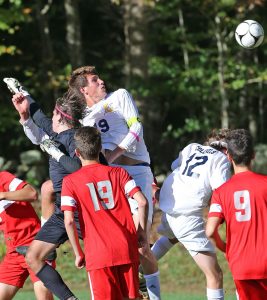 2018 Ledyard graduate Trevor Hutchins (#19 in white) was a three-sport competitor at the school. Todd Kalif – MaxPreps.

Which raises a final question — how does an idea like celebrating and participating in three sports take hold and start to blossom? Everything already discussed in this story is certainly a big factor — a determined administrator with a specific plan; a group of supportive coaches; and parents that understand what can be gained by allowing student-athletes a diverse athletics experience. Yet in speaking to some of these Ledyard three-sport standouts it seemed clear the biggest influence on changing culture and the ones driving the change is the athletes themselves.

“When I got more involved and became more of a leader for my teams, it definitely was something that I personally tried to encourage,” explained 2018 Ledyard graduate Delaney Gagnon who after playing only soccer as a freshman, would also compete in basketball, indoor track and outdoor track over her final three seasons. “It just is something Mr. Buonocore has really focused on the past couple of years, and I think it is making a big difference.”

A student who has already chosen to participate in sports has already shown they interested in pushing themselves, seeking competition, and appreciate the opportunities to develop close relationships with other students. Their instincts are to participate more — to be involved in something every season — and they will be the best recruiters a department has if the barriers to participation are removed.

Students want to be a part of something. They want to spend time with their friends and have opportunities to make new friends and meet different people. Mostly, they like the challenges and experiences that come with lots of varied athletics participation. Given all that, why would they just choose to play just one?