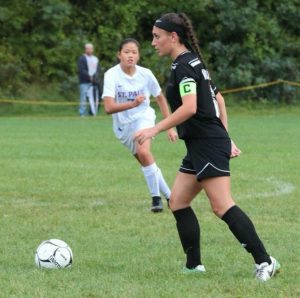 Woodland High School senior Juliana Villano did not set out to be an example of anything, other than perhaps someone who achieved exactly what she wanted to achieve. Circumstances then intervened – twice – and changed her story drastically.

It might sound trite, but Villano says her athletic goals weren’t exotic. “I’ve been playing soccer since I was four years old, and I just wanted to play high school soccer.” That became a reality, perhaps even earlier than she could have expected, as she earned time varsity playing time at Woodland in her freshman season. She was then was firmly ensconced in the varsity lineup as a sophomore. That’s when the story changed, and her example became about something different.

Villano tore her right ACL at the tail end of that sophomore season. The high profile ACL tears means most athletes know what it means. Surgery, lots of rehab, with the hope of being back somewhere close to full strength between nine months and a year after surgery. That gave the burgeoning high school competitor a clear target: be back on the field for her junior season. Though even with the clear goal the road back was unsurprisingly challenging, with lots of pain, mental roadblocks to overcome, and challenges along the way.

There would be no club soccer in either the spring or the summer, but as she did when earning her spot on the varsity team, Villano met her goal. She was back on the field, back in the starting lineup for the Hawks in her junior season.

Isn’t that enough? She showed great focus, determination, and will to get back on the field and be a part of the team again. Her high school athletics story was now one of perseverance, not just accomplishment. Turns out, it was time for another obstacle. 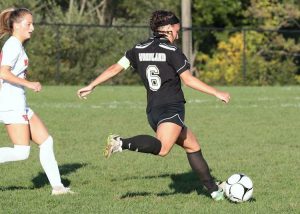 Despite the injuries Villano has played fearlessly as a senior. Courtesy Villano family.

Late in October with the postseason looming, another ACL tear, this time the left knee. New verse, same as the first.

“Last year when she went down it became very evident how important she was to the team because she motivates them, she pushes them she encourages them,” Woodland coach Cait Witham said. “She means a lot to the kids. It’s just who she is as a kid and who she is as a player that gets her a lot of respect.”

All the questions and emotion returned for Villano, this time with the added pressure that the window for high school competition might be closing. A scholastic athletics career is finite – as a single-sport athlete barring truly unique circumstances, a student-athlete gets just four bites at the apple.

Villano faced the prospect of having the final bite taken away, but she didn’t flinch. As she did roughly one year prior, she got over the disappointment and the questions of “why me” and got to work. Surprisingly, rather than being cowed by having recently gone through the same trying rehab process, she was able to find the positive in the unfortunate.

“The second time I was more like everything happens for a reason, obviously this is the path I have to kind of go on to get where I have to be,” Villano noted. “Throughout the recovery of the first time I was struggling more. I was always upset, it was hard for me to go to soccer practice and see my friends having fun and doing really good. The second time was a lot easier because I knew I had to go through it to get where I wanted to be.”

That mental toughness once again had her back where she dreamed to be, on the field with her Woodland teammates for her senior year. Despite a pair of devastating injuries, she was back controlling the center of the field from her midfield spot, and if anything, dealing with the two setbacks helped her cherish that time on the field with greater perspective. “Getting the recognition of being a senior captain gave me a little more confidence. I got injured two times, I don’t think that defines me as a player. The way I play is the person I am.” 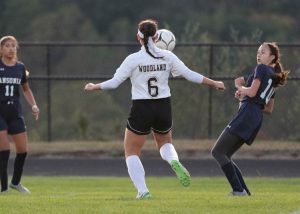 Being back on the field and representing Woodland is a victory for VIllano. Courtesy Villano family.

The way she played and her mere presence on the field undoubtedly made an impact on everyone according to her coach. “She starts every game, she goes in hard, she doesn’t shy away from contact or tackles. Again, I think that just having her out there, and having her set an example for the younger kids, it helps a lot,”

Villano and her team may not have achieved every goal they set out for the season. The senior was eyeing an NVL title and a deep tournament run in the CIAC Class M bracket, neither of which came to fruition. But by finding her way back to the field in her senior campaign, Villano earned the appreciation and respect of those around her.

Every single part of the high school athletics experience can provide a lesson. Athletes change in subtle ways with each lesson, gaining newfound wells of commitment or a change of perspective as events unfold. The lesson Villano thinks her high school sports story tells is a simple one.

“Don’t take anything for granted, and always plays as hard as you can cause you never know when that can end.”

A dream to simply be on a team and be a part of the high school sports experience can move and shift and turn into an example that can provide a light and a path for others. Or it offers proof that the only wins aren’t just on the scoreboard; sometimes the victories come just by stepping on the field at all. Juliana Villano can attest to that. Despite more opponents and obstacles than seem fair to deal with her career featured just about every type of victory imaginable.