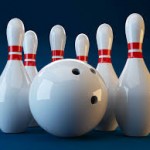 More than sixty competitors took part trying to earn titles in boys and girls competition. Dylan Werth of Parish Hill earned a 258-173 win in the final over Justin Veal from Wheeler High School to capture the boys title. On the girls side, Alexandra Dombrowski of Middletown narrowly edged Sydney Reardon from New Milford 199-195 in the final to capture the girls title.

Veal had the top average score during the five regular games, posting an average of 221.5.  Dombrowsk was also tops during the regular frames with her average of 188.75, which was also the third highest average overall.

Applications for the team bowling tournament which will take place on Saturday, March 2 at Bowl-O-Rama in Newington. For information on the tournament, anyone may call Judy Sylvester or Bob Lehr at the CIAC offices. The tournament is scheduled to start at 10:00 A.M.