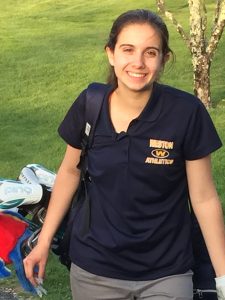 When Weston High School field hockey coach Samantha Jacobsen shares the common feeling amongst her athletes during games was “it’s okay, Carolyn’s got it, we’re good,” she’s referring specifically to the confidence her athletes had in their senior goalkeeper Carolyn Zech. Taken more broadly, it nicely articulates the sentiments that accompanied everything Zech took on during her remarkable high school career, culminating in her selection as Weston’s female 2018-19 CAS-CIAC Scholar Athlete.

That her high school athletics career would include an honor like the Scholar Athlete recognition is a lesson on the rewards that can come from taking a chance. It is an unlikely outcome for a student who stepped onto the field hockey field her freshman year having never played the sport in her life; and for one joining the golf team that spring despite never previously playing a nine-hole round. That lack of specific experience was not going to deter Zech who had grown up playing sports and was determined to participate at the high school level.

“I definitely knew I wanted to do sports in high school, so it was more of a matter of figuring out which ones, rather than not doing it at all.”

One leap of faith in trying a new sport at the high school level beget another as shortly after joining the field hockey team she somewhat reluctantly volunteered (or was volunteered) to anchor the defense as a goalie. It may not have been exactly what she envisioned when she signed up, but she discovered it was a job that suited her.

“The varsity goalie, I had played soccer with her younger sister, and she immediately recruited me to be a goalie, and I was the only person who wasn’t afraid of the ball, so that’s how that came about,” Zech explains. “I have always had fast reflexes, so I loved doing that, and I found it a lot easier that somehow being able to look at the ball on the ground and still be able to run.”

To hear her tell it, Zech’s comfort and relative success in goal were a result of her discovery that the position suited her skills and personality. While that is no doubt true, Jacobsen cites a factor that helps explain her success in all areas: a proclivity for hard work.

“She worked her butt off,” her coach states. “She asked questions, she came into practice ready to go. After practice when the girls wanted to practice shooting, she was like ‘oh yeah, absolutely I will stay suited up for 30 minutes after practice.’ She is just a natural born leader a natural born goalie. She was meant to be in there, when she plays she just shines.” 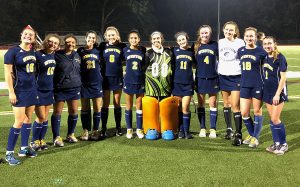 The work led to a four-year career that saw her earn All-South-West Conference accolades as both a junior and a senior. In her senior season she helped Weston earn the program’s first CIAC tournament appearance in more than two decades.

Her experience on the golf team has been different, but rewarding in its own way. Neither the team, nor Zech herself enjoyed the same level of success, but she has still found plenty of joy from the experience, and she improved enough to place as a conference medalist at the SWC Championships.

“I did that [played golf] because I wanted something to do with my Dad because he loved golf. I thought it could be fun and I naively didn’t think it looked that hard, which is a mistake I think a lot of people make. I’ve been doing that for four years, which has still proved to be frustrating, but it is fun.”

Not surprisingly, and as befitting a Scholar Athlete selection, the hard work and commitment that serve her so well in her athletic endeavors were also apparent in the classroom where she is the class Salutatorian a National Merit Scholar and a Presidential Scholar nominee. She has also piled up numerous academic honors in math, history and Spanish. She also has excelled in other extra-curricular activities, including debate, where this spring she and her partner placed first in the CT State Debate Championships. Zech also was the captain of the Weston mock trial team that also claimed state championships and went on to compete in national championships.

It’s an impressive list of activities and accomplishments any way you look at it. And for Zech, fittingly for a student-athlete of her level of achievement, she is keenly aware how everything she took part in during her high school career both on and off the field all fit together and supported who she is and what she’s done. 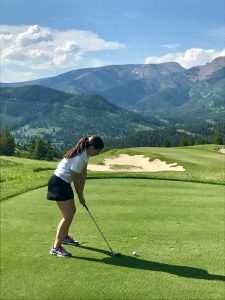 “I think the lessons that I have learned in both [sports] have been so valuable that I wouldn’t change anything,” Zech explains. “Learning to play golf and learning to say calm and happy even when you’re not having a good round I think is a skill that I can turn into a lot of other things in my life, and have thus far. And being on a team that I have fun with, while getting to do something that I love and learning how to lead a team even if there are people older than me is also a skill that I will definitely, and have definitely used.”

Leading is a concept that comes up a lot in regard to Zech, and it’s clearly a responsibility and role she relishes. Assuming that challenge was always of interest, and was at least a part of what drew her to find her home in goal for the field hockey team – but finding the confidence to speak up and be heard as a leader was one example of the growth lessons that comes from sports.

“I think she’s a naturally gifted, born leader,” Jacobsen says. “She got more comfortable, vocalized more, but I don’t think at any point I thought that she wasn’t a leader. I think she grew as a person and her leadership was always there.”

“I think it’s just something I’ve gravitated towards for a long time,” said Zech. “It wasn’t a conscious decision on my part but it just naturally carried over to sports where I found myself in these leadership positions. I found myself being a goalie and I realized ‘huh the team would probably play a lot better if I told them there was a girl standing behind them that they can’t see.’ I don’t like to stand by and idly watch when I know there is something I can help people with…I think it’s just a natural inclination to help people whenever I can. I’ve been there before in both of these sports when I didn’t really know what was going on and I remember the people that took the time to help me.”

Zech recognizes and is fully aware of the many ways in which her athletic participation buoyed her academics, and other activities. She compares the collaboration and teamwork necessary for field hockey success to the way her team of six needs to plan out a strategy for mock trial; and then how the individual focus and necessity to carefully consider a game plan has benefited her success in debate.

“Her experiences on the field and course have helped her become a better student and overall competitor in other endeavors,” Weston Athletics Assistant Dawn Egan notes. “Most of all, Carolyn has made a lasting contribution to Weston High School by mentoring and developing her teammates on both her non-athletic and athletic teams.”

The relationships that come from being a part of a team and competing together also provided key lessons for the senior standout. There were myriad ways her ability to relate to people and the confidence to do so, changed and grew through her athletic career. She cites finding a way to be a vocal leader in field hockey, even when she was younger than some of her teammates. Or discovering how to address scoring disputes in golf in ways that competitors would not take issue with. And finally developing an understanding of how to ask more of teammates and lead them, or specifically telling them what to do, without them becoming resentful were all skills she developed throughout the course of her career. She describes them as the “unexpected lessons” that came from participation in high school sports.

Unexpected lessons nicely dovetails with her athletics experience as the specific successes of her career were unexpected. Carolyn Zech challenged herself and took something of a risk when she began her high school athletics career. She found a way to make the most of, and thrive, with every circumstance and opportunity, and her recognition as the Weston female Scholar Athlete is the latest reward. 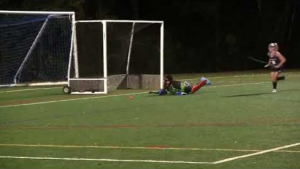 “Whatever you need Carolyn to do, she is there, and she there 110-percent, and she will give it everything she’s got,” Jacobsen raved about her senior leader. “Her being the Scholar Athlete just shows how important school, and her community, and her teammates are to her. She’s really just paving the way to success for herself and all the people and teammates behind her.”

“I was so happy to hear the that school felt like I contributed enough to be recognized for that kind of thing,” says Zech. “It was nice to be recognized for the extra effort that takes because sometimes you feel like people don’t necessarily recognize how much harder that is. Being a scholar and athlete has been a big part of my high school experience, so it was great.”

Taking stock of everything she accomplished athletically, academically, and in the school community, it seems clear Coach Jacobsen had it exactly right when talking about Zech. In field hockey, the golf team, the classroom or any other of the activities in which she took part and excelled, Carolyn Zech did indeed “have it.” And Weston High School was no doubt “good” as a result.