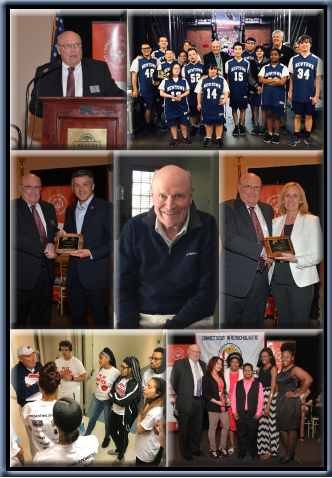 George Synnott, Director of Unified Sports® for CIAC and CT Special Olympics, has announced his plan to retire at the close of the school year. George has worked with the Unified Sports division for the past nine years, serving as director for the last five.

George first became active in CAS-CIAC in 1994 when, as an assistant principal at Berlin High school, he joined the CAS Legislation Committee. Over the years, despite the increasing demands of school administration, his commitment to and involvement in the association steadily expanded and he went on to serve in several of the organization’s most challenging and important leadership roles, including chair of the CIAC Board of Control. At the time of his retirement from public education in 2010, George was a member of ten committees and boards while also serving as a UCAPP mentor.

As a member of our Unified staff, George has made innumerable contributions to Unified Sports in Connecticut and has influenced Unified programs in other states as well. Under his direction, Unified Sports has expanded with respect to the number of schools involved as well as in the breadth and depth of program opportunities. His enthusiasm for the cause and encouragement of everyone involved have helped forge strong connections with so many coaches, athletic directors, and students. It’s no wonder that George says that “the last nine years have been the most rewarding part of my career.”

CAS-CIAC wishes George all the best in retirement and extend our heartfelt thanks for all he has done for Unified Sports!