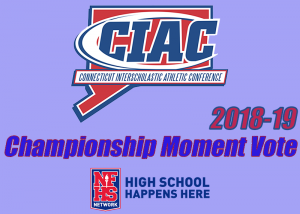 The 2018-19 school year and CIAC Championships came to a close but we aren’t quite ready to let it go. Instead, we want the fans to weigh in on the best moment from a year of CIAC Championships. The NFHS Network streamed 50 of those events live, giving us many opportunities to choose fantastic moments to highlight. Given all those great options, we have selected 17 standouts (one from each sport covered). Now the ball is in your court to choose your favorite. So vote in the poll below (order randomly assigned) to select the best moment from the year each of which is featured below the poll. We will also be sharing the highlights on Instagram, Twitter, and YouTube and incorporating those votes into the title. The voting will close on Friday, July 19 at noon and we will announce the top-5 in a daily countdown the following week.