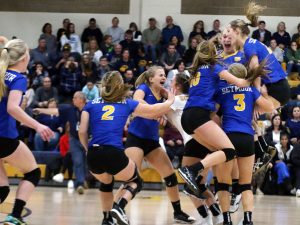 CHESHIRE, Conn. – Twenty Connecticut high school volleyball teams will take part in a full-day of early season action at the CIAC Early Season Block Party Tournament on Saturday, September 14. The event will be held at the CT Sports Center in Woodbridge with play beginning at 8:30 a.m.

The event will be a club-style tournament with action simultaneously taking place on five courts. There will be pool play to begin the day, followed by double-elimination. All twenty teams will play roughly eight matches and competition should conclude around 3 p.m. Admission for the full day of competition is $10 for adults and $5 for students.

The schedule is full of some of the top volleyball teams in Connecticut, including three of the 2018 CIAC state champions. Nearly the full field earned CIAC tournament berths in 2018, and along with the three reigning state champions the group includes another tournament finalist, two other semifinalists and two more quarterfinalists from last year’s state tournaments.

Beginning in 2013 volleyball teams were allowed to play in two multi-team events among its 20 regular season contests, with the results from those events not counting towards tournament qualification. CIAC created and held its first early-season tournament last year in an effort to provide a large, competitive, multi-team event opportunity to facilitate teams making good use of the permitted contests.