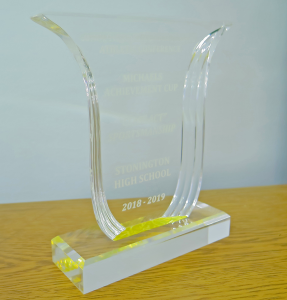 CHESHIRE, Conn. – Twenty high school athletic programs have been selected as CIAC Michaels Achievement Cup exemplary programs recognizing their achievements for the 2018-19 academic year. A photo gallery of the honorees are below.

The 20 schools were selected by the Michaels Cup Committee for their efforts in launching and implementing the CIAC Class Act Schools sportsmanship program. The Class Act School program was launched at the 2016 Sportsmanship Conference and was designed to empower schools and specifically students to enhance sportsmanship.

“The Class Act Sportsmanship program guides schools in creating a positive atmosphere through the passion of sport,” Glenn Lungarini, CAS-CIAC Executive Director stated. “The CIAC is proud to recognize our Michaels Cup recipients for their creativity in inspiring school spirit within their student bodies. We encourage all 115 CIAC Class Act schools to continue their commitment toward engaging fans, athletes, coaches, and officials in high standards of sportsmanship.”

All CIAC member schools that have opted in to the voluntary Class Act Schools program were eligible for the Michaels Cup. All Class Act Schools were given the opportunity to fill out an application consisting of several questions regarding the ways the Class Act program was implemented and the impact that has come as a result. The Sportsmanship Committee then studied the applications and selected the 20 honorees.

This is the third year the Michaels Achievement Cup exemplary program has been tied directly to the Class Act sportsmanship program, with 14 schools being honored in year one and 19 schools earning the honor last season. One school is being recognized for the first time as an exemplary program since CIAC began administration of the program. Ten of the 20 schools did not receive this recognition last year, and eight of the 20 are receiving the first honor since the award was tied to the Class Act Program. As of this release, 115 schools have elected to participate in the voluntary Class Act Schools program.

The 20 schools were honored at the CIAC Sportsmanship Conference at the AquaTurf in Southington, an event with more than 850 school representatives in attendance.

The Michaels Achievement Cup program was created in the early 1980s as the brainchild of Roy Michaels, the owner of Michaels Jewelers, in an effort to recognize outstanding athletic programs. The program recognized yearly winners since that time, and then in 2008 transitioned directly to CIAC administration of the program.