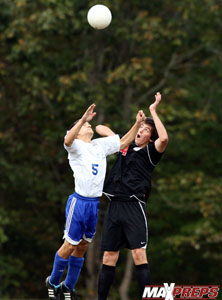 Start with this; this exercise means absolutely nothing. Breaking down what happened in the past is a fun pastime, but it needs to be clear that there is little to no predictive value in this endeavor. It can just be a fun endeavor to take a look at history to try and find interesting trends, although in this case having more years of data would be even more helpful. Either way, here is a breakdown of the success level teams enjoyed based on their seed in last fall’s CIAC Tournaments. In this case it is how the top four seeds fared, which was also an arbitrary break point, to see what earning a top four seed entailed last year.

Speaking of teams outside the top four seeds winning, there were three such examples of that phenomenon occurring in 2011. Two of them were five seeds, and the other was a seven seed. So in 19 fall CIAC Tournaments, the eventual winner was a four seed or higher in 16 of 19, or 84%. Going back one step we find that 23 of the 38 teams participating in the championship game were made up of teams seeded fourth or higher, which comes out to 61%. And moving back one more round, of the 76 teams reaching the semifinal rounds slightly more than half of them (55%) came from the top four seeds. This generally fits with the concept of tournament upsets, that teams making surprising runs in the early rounds often will run out of steam into the later rounds of play (also consider in some cases the lower seeds have played an extra game at this stage as the top seeds occasionally have an opening-round bye).

Taking a deeper look at each sport, boys soccer was remarkably consistent in some ways across the classes. Every class featured semifinals consisting of two top four seeds, and two teams outside the top four, and each final had one team outside the top four and one in. Each champion was a top four seed as well in 2011. Field hockey was not prone to many upsets as nine of the 12 semifinalists came from seeds four or better, and five of the six finalists were also from that group. Class S in field hockey was one of only three tournaments in which all four semifinal spots were claimed by the top four seeds.

Because of its smaller tournament field, football would be expected to be not as prone to the upset bug, and that was the case in 2011. All four champions were either first or second seeds, though the success of the favorites came through in the later rounds as only 58% (7-of-12).

Girls soccer saw quite a bit of tournament parity in 2011, with the exception of Class M. The Class M event was one of the three across all sports in the fall with all four top seeds in the semifinal, and then had the top seed earn the title. Overall, less than half the semifinal participants (6-of-16) were top four seeds and exactly half of the teams that reached the final game came from the top four seeds. Class S provided the ultimate outlier as the entire semifinal (and thus final, and champion) was made up of teams outside the top four seed, with a fifth seed ultimately claiming the title. of the semifinalists were top four seeds and only one of the four championship game matchups featured a top seed against a number-two seed.

Class S was also prone to upsets in girls volleyball with only one top-four seed reaching the semifinals, but generally the patterns were similar in 2011 to the other sports. Nine of the 16 semifinal teams were top four seeds and then five of the eight finalists. Though girls volleyball did see two champions come from outside the top seeds including a seven seed. The third tournament that was pure chalk in the semifinal round was the Class LL tournament in girls volleyball, though it was a third seed that ultimately triumphed.

What does any of this mean? As stated at the beginning, it means absolutely nothing. There is virtually no reason to believe that past tournament results (particularly with this small a sample) are predictive for future events. This is definitely something to track and keep tabs on going forward but for now this was purely an entertaining diversion as the clock winds down the clock to the start of the 2012 fall seasons. If there is any conclusion to reach moving forward it is that once a team is in the tournament, the results are decided on the field and every team has a chance. All the numbers and study of the history can’t change the fact that every team controls its own destiny one the games begin.