Posted on September 3, 2012 by Matthew Fischer 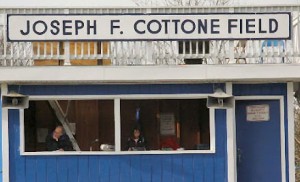 The following is the regular season field hockey overtime procedure for the 2012 season. The rule has been updated to include the new NFHS ruling regarding cards/disqualified players:

OVERTIME PLAY: All game rules, including substitutions, shall apply except as specified below. The overtime is considered over when a goal is scored or the time has expired.

At the end of regulation play, there shall be a five (5) minute intermission. Players may confer with their coaches and substitutions may be made. The officials shall meet with the team captains for a coin toss. The Home Team shall call the coin in the air. The winner of the coin toss shall choose whether or not to take possession of the ball. Direction of play remains the same as the second half.

A 10-minute “sudden victory” overtime period shall be played with 7v7.

If a player receives a red-card during overtime that player shall be disqualified and may not play for the remainder of the game and the team shall play short until the game is completed.

A player serving a five or ten-minute suspension (yellow card) at the end of the regulation game must serve the remainder of suspension during the overtime and the team shall play short until the suspension time has expired.

A player receiving a yellow card during the overtime may not be replaced or re-enter until her suspension period has expired.