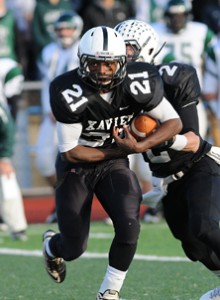 Sean Marinan enjoyed a relatively stress-free football season in 2011 as far as coaching goes. His Xavier (Middletown, Conn.) team mulched everyone in its path en route to another unbeaten season, another CIAC Class LL title, and the top rankings in both the New London Day state coaches and New Haven Register media polls.
This season, Marinan has already found things to be a little different.

“It’s funny — in a scrimmage, I was telling a kid to get in the middle of the field,” Marinan said. “And he’s standing at the hash and didn’t move. As I’m walking across the field, I’m yelling at him to get to the middle. He moves from the outside of the hash to the inside of the hash.

“I said to him, ‘At what point are you going to move?’ He didn’t…A lot of the people in the stands were cracking up.”