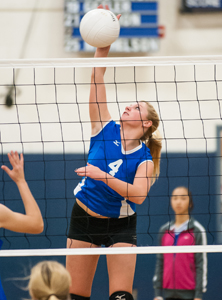 Senior Jessica Hubina is hoping to help Bristol Eastern return to its championship ways after a six-year drought. MaxPreps photo by Ken Rutt

It’s been six years since Bristol Eastern (Bristol, Conn.) won the last of its four CIAC state championships. The Lancers appear primed to make a run for No. 5 this season.

Not that Eastern isn’t always in the hunt. Since that last championship year of 2006, coach Stacy Rivoira’s teams have reached the final in 2007 and been to the quarterfinals each of the past four seasons.

This year’s team has a trio of senior leadership and the right mix of underclassmen to move the Lancers beyond the quarters.

“We’re very fortunate this year. The three seniors who are returning are three-year starters for me, and they have a lot of leadership skills, and the chemistry of the whole group is just tremendous this year,” Rivoira said. “Beside their work ethic and their natural athletic ability, together as a group they work really well together.”