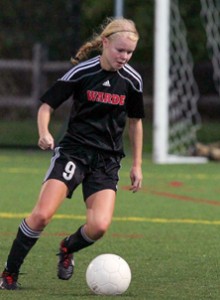 Fairfield Warde (Conn.) girls soccer has been a model of consistency in the FCIAC over the past six years.

The Mustangs have been highly competitive in each of those seasons, around the nine-to-10 win range and always in the postseason. That is except head coach Tom Cunningham’s first season in 2007, when Warde won it all.

Warde went 10-4-1 in the regular season that year and went on to win its only CIAC Class LL state championship in its only final appearance. Cunningham says he sees similarities between that championship team and this year’s model.

“This group is a fun group of girls,” said Cunningham, whose team is 10-3-2 with one regular season match left on Thursday against Darien. “They really enjoy playing the game. A lot of them have a lot of experience from when they were in the youth program. We have a really strong balance.

“We have three seniors this year who are tremendous leaders. The talent is spread throughout the grade levels, but it’s a great combination of older players with great leadership qualities and the younger players who are so enthusiastic, wanting to play and really putting it all out there.