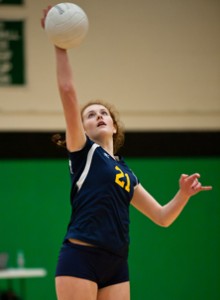 It was the third match of the season and the RHAM (Hebron, Conn.) girls’ volleyball team trailed East Lyme, 2-0, just as they did when the latter swept them in last season’s CIAC Class L championship match.

“As a coach sitting on the sideline,” Sachems coach Tim Guernsey said, “you realize what is about to happen, and there’s not anything you can say to the kids where it’s going to get them out of a funk. You know you’re about to get swept.”

Except this time, RHAM didn’t. It rallied to win the final three games and take the Sept. 17 match. It was the first time in the program’s 11-year history that it had comeback from a 2-0 deficit.

Since then, the Sachems (18-0) have dropped only one other game. That was during a four-game win over Class LL contender Southington.

“They’re a little tougher than last year’s team,” Guernsey said. “That East Lyme match where we came back and won three in a row really brought them together as a group and made us tougher as a team.”

RHAM has evolved into one of the state’s top girls’ volleyball programs in a short period of time, winning four CIAC state titles over the last five seasons.