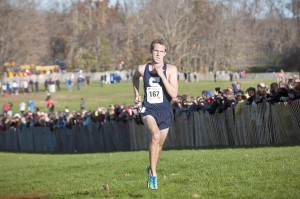 Henry Wynne of Staples was first across the line at the New England Cross Country Championships. Photo by Mark Mirko – Hartford Courant.

Connecticut runners fared extremely well at the 2012 New England Cross Country Championships, including an individual first-place finish in the boys race held Saturday November 10 in Cumberland, Maine. Henry Wynne of Staples was the first boy across the line in a field of 267 runners to lead 17 runners who earned All-New England status by finishing in the top-25 of either the boys or girls race.

Wynne ran a time of 16:12.86 to edge out the second place runner from Rhode Island by just under two seconds. He was one of 10 boys to claim All-New England honors with a top-25 finish, including three others that placed in the top-10. On the girls side, Elizabeth Conway of Manchester paced the Connecticut runners by covering the 5-kilometer course in a time of 19:09.01, which was good for fourth place. Seven Connecticut girls placed in the top-25 to claim All-New England accolades, and Connecticut also produced the second-fastest freshman in the race as Hannah Debalsi of Staples was 11th overall. The 17 individual All-New England competitors are two more than Connecticut earned at the 2011 Championships.

In the team standings Ridgefield produced the top team finish on the girls side, with Laura Hergenrother’s 18th-place finish pacing the team to 218 points and a fifth-place finish. Glastonbury was only one spot behind in sixth place. New Milford paced the Connecticut boys teams by earning 263 points to place fifth as well with Ryan Clarke placing 30th to lead the team. Newtown was also one spot back with a sixth-place finish.