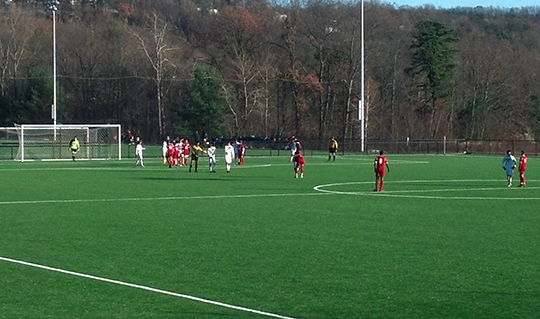 The Class L boys soccer Tournament match between Stratford and Farmington was one of eight contests attended on a busy day of CIAC Tournament action.

The plan made perfect sense on paper. Due to the extremely unpleasant weather that has graced the state over the past few weeks, Friday November 9 became a day chalk full of CIAC Tournament action. This seemed like an opportunity that does not often present itself with five different sports holding tournament action, so this CIAC staffer decided to get a taste of the action and atmosphere at all five sports. What follows are the random collected thoughts of witnessing seven games (or events) over the course of eight hours in one day of CIAC Tournament action.

11:55 a.m. – On the road for the longest drive of the day from the CIAC offices in Cheshire to a Class S field hockey match between Stafford and Northwest Catholic being played at Suffield. The ugly weather has forced many teams to play tournament games at neutral sites, which is critical to the success of this marathon schedule and the attempt to see contests from each of the current fall tournament sports, as well as something from each Class.

12:45 p.m. – The trusty GPS leads to the school, traveling through some beautiful country that invokes the beginning of the classic movie “Hoosiers.” If the day lives up to that level of excitement it will be well worth the trip. As for this match, it is early in the second half when I arrive with one team leading 1-0. Because it is a neutral site match, it is unclear which team is in front, and I decide than rather than ask another fan I’ll just enjoy the action and worry about the details later. Stafford, the higher seed, controlled most of the action and pressed forward consistently, searching either for the equalizing goal, or to create a greater cushion (again, I didn’t want to know). Their efforts were thwarted by consistently steady play from the Northwest Catholic goalkeeper, who played with a casualness that belied the pressure in front of her. The constant attacking from Stafford did bring to my attention the steady play of their sweeper, who was left to squelch counter attacks nearly on her own as her teammates pressed forward.

The goal finally comes from Stafford, making it 2-0 (mystery solved) on a well-run corner. It is clear why teams celebrate vociferously when they earn corners, as particularly on turf fields they create clear scoring chances. With the season waning Northwest Catholic bounces back with a late goal to up the pressure but Stafford manages to hold on with some timely tackles to stall attacks. Among the most memorable moments was when a high ball caught a player and both teams paused to make sure the player was okay. It was also moving to see the realization of the finality of the result impact the players on Northwest Catholic. We will delve into this in greater depth, but it is always affecting to observe a high school career coming to a close.

1:45 p.m. – Back in the car and heading towards Farmington which for this day is the hub of CIAC soccer. The Farmington Sports Arena is scheduled to host a total of eight games on this day, starting in mid-afternoon. After fueling up on a third cup of coffee, I settled in for the first game as Farmington took on Stratford in a boys soccer Class L contest. The match illustrated well the beauty (and frustration, depending on your viewpoint) of sports like soccer and field hockey. Farmington generally controlled the play, and seemed on the verge of finding the goal, but created very few clear scoring chances. Those clear chances came more often for Stratford which had less of possession, but managed several clear chances including a shot that hit the inside of the post but stayed out. Control of the ball and the flow of the match can often mean nothing when the final whistle blows.

That ultimately was not the case in this match as Farmington broke through late in the first half and then seemed to have the match clearly in hand with a second tally in the second. This provided another situation where the finality of the tournament influences the contest. Trailing 2-0 Stratford saw its season coming to an end, and ramp up the energy and intensity to previously unseen levels and began coming at Farmington defense in waves. Suddenly, a team that appeared calm and in control throughout the match now looked unnerved and rattled. It can happen just that fast, with the pressure of the postseason mounting and a level of commitment and tenacity that cannot be matched in a practice setting. In this case Stratford did score to cut into the lead, but a quick counter and score put the match back out of reach. Players, coaches and fans know intuitively that teams might bring a fraction more intensity with a season in the brink, but it was jarring to see it play out before our eyes in such clear fashion.

4:00 p.m. – It is starting to get a little chilly as the sun goes down, and unfortunately this journey to attend games was a tad on the impromptu side, and I’m not all that well prepared in terms of warm weather clothes. In other words, I am cold. But it is time to get a big helping of girls tournament action as three matches kick off at nearly the same time on the three Farmington Sports Arena turf fields. I strategically position myself in a position to see all three contests, but my primary focus is the Class LL battle between Naugatuck and Manchester who come in with nearly identical records. The potential for a significant upset is being tracked also, as number-two seed Avon seems to have its hands full with Bethel in a Class L match. Unfortunately the schedule prevents me from staying until the conclusion of these matches, which were hard-fought, hotly-contested matches. It was the goaltenders that stood out in this one, with the Naugatuck keeper thwarting a breakaway to keep the match tight after an early Manchester goal, and the Bethel keeper making a brilliant reaction save on a point-blank header. CIACsports.com has previously discussed (link) the value of defense, and the backbone is the goaltender that can very quickly erase a breakdown from their teammates. These contests are intriguing and intense, but time clicks on and the road beckons with two more venues to visit.

5:40 p.m. – It is very dark in the parking lot of Plainville High School upon arriving for the Class S and M Diving Championships. This is an entirely new experience as I have only seen limited diving competition in person, and for the most part it is an enjoyable spectator atmosphere. As a neutral observer it can be tough to follow, but if you’re just looking for a combination of artistry and athleticism you can just sit back and enjoy the show. For even those who are not exactly sure what they are seeing, it is exciting to see a particular dive just jump out at you. Sometimes it is how cleanly the dive is performed, or the explosive bounce off the board when you notice a diver appears many feet higher above the water than the previous competitor. The crowd enjoyed the competition very much and I was right along with them. Unfortunately again the road called again and the final leg of the trip is the second-longest of the day.

6:30 p.m. – That trip is made considerably longer thanks to some very slow traffic leaving the Plainville area and the schedule now has a major hiccup. Eventually the road clears and despite some GPS concerns I settle at the East Haven gym to watch a volleyball contest for the home team against Ansonia with the second set just about to begin in this Class M tournament contest.

In a previous job, I worked with a collegiate volleyball coach who had more than 1,200 wins on his resume (not a misprint, the most wins of any college volleyball coach) and he would point out that while attacking and kills are what get noticed, it is the often overlooked elements of serving and passing. They are not overlooked in this contest as East Haven dominated with its service game and didn’t let the visitors get comfortable. This brought out another series of moments that seemed to exemplify the teaching moments that arise through the course of a sporting event. In this case the serves kept coming at one player, who was struggling to make the pass. And right before our eyes was the developmental moment, with the player battling, and battling some more to execute and not be defeated in this singular matchup. Because this is real life, there was no eureka moment where she executed the pass flawlessly, and suddenly her team sprung to life and earned the win. Instead there were some more successes, and more failures. Yet among all the contests this little series provided some of the best illustration of the lessons that can be learned within the lines of competition.

8:30 p.m. – With the volleyball concluded, it is time to head home. Yet there is one more image that remains stuck in my head. For as long as I’ve worked in sports, nothing impacts me as much as witnessing the heartache that often accompanies the conclusion of a playing career. Of course tournament play necessarily provides those moments with every game, and the first match of the day gave a vivid example of that emotion. At the final whistle, a member of the Northwest Catholic field hockey team (presumably a senior, I did not have a roster with me) dropped to one knee on the field, with her head in hands. Her high school athletic career, at least in field hockey, had come to an end. Like many, many players before her, the emotion of the moment overcame her. My heart went out to her, as it does every time I see such scenarios. Eventually she was surrounded by her teammates who provided encouraging hugs and she got to her feet to go shake hands with the winning team. Obviously the feelings and disappointment will not go away immediately but I hope that along with the sadness the players whose high school careers come to an end the next few weeks can find a way to appreciate the journey and what they have accomplished. This was another little moment, but any moment that can illustrate the emotion and effort these outstanding athletes pour into their competition is a moment worth recognizing. I am thankful I had the opportunity to see it.