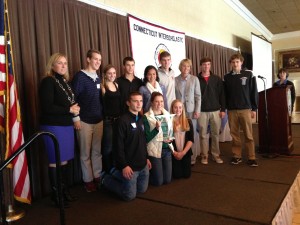 CHESHIRE,Conn.– Glastonbury High School has been selected as the overall CIAC Michael’s Achievement Cup recipient for its outstanding achievement as an overall athletics program for the 2011-12 academic year.

The announcement was made at the sixth-annual CIAC Sportsmanship Conference where each of the eighteen schools recognized as CIAC Michael’s Achievement Cup exemplary programs were honored. Glastonbury earns the honor as the overall Michael’s Achievement Cup recipient for the second-consecutive year becoming the first school to earn the honor more than once, since the CIAC assumed oversight of the program in 2008.

Glastonbury was recognized based on achievement in seven distinct areas which are sportsmanship, participation, athletic scholarship, athletic personnel, equity, chemical free initiatives and athletic achievement. The selection committee noted the well-established and crafted department mission statement for Glastonbury, and the thorough evaluation process and general organization that exists within the athletics department. On the field, the school captured four CIAC championships with four additional runner-up finishes.

The Michael’s Achievement Cup selection process includes mathematical calculation of collected survey data and consideration of the Michael’s Cup Committee which includes school administrators and media members. All CIAC member schools are asked to submit information via a survey for consideration for recognition, and a mathematical formula is used to analyze the data. The CIAC Michael’s Achievement Cup Committee reviews the statistical data and discusses the merit of each potential award recipients based on a comparison of its written criteria and CIAC compliance. The committee then requests additional information for the program with the highest score in each of the six CIAC classifications.

The Michael’s Achievement Cup was created in the early 1980s as the brainchild of Roy Michaels, the owner of Michaels Jewelry, in an effort to recognize outstanding athletic programs. The program recognized yearly winners since that time, and then in 2008 transitioned directly to CIAC oversight of the program.