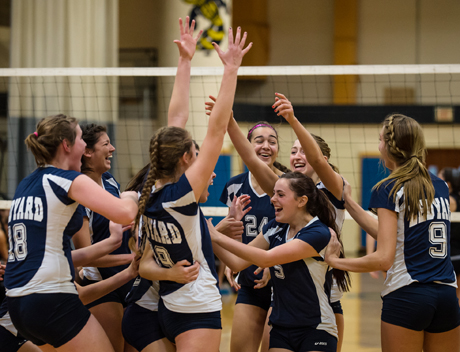 Four years ago, Shirley Karkow interviewed for the Ledyard (Conn.) girls’ volleyball job. The program, once one of the best in the Eastern Connecticut Conference, had been through several losing seasons.

“When they interviewed me, they said, ‘How long will it take to become a successful program?,’ ” Karkow recalled. “Obviously, I didn’t know the players at all. I just said, ‘Generally, it takes three or four years.’ And I really do believe that.

“If you set up a plan, you can do it. Of course you have to have some luck and some athletic players. There’s a lot of things that go into it. I just felt like if we did the right things and people were on board, yeah, we could be successful.”

Karkow was right. Four years after she was hired, the Colonels made program history, winning their first CIAC state title on Saturday in their first appearance.

Senior Kylie Fustini, who’d been with the program for all four years, had a match-high 13 kills with two blocks as Ledyard swept top-seeded Woodland (Beacon Falls, Conn.), 25-17, 25-23, 25-20, in the Class M championship match at East Haven High.