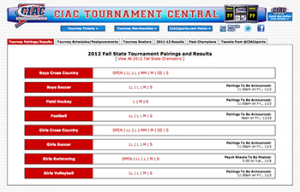 The CIAC Network will be broadcasting three games live on-line at www.CIAC.tv while two of those games will also be available live on Connecticut Public Television Sports. MSGVarsity.com will also have broadcasts which will be available on-line in the days following the games.

The semi-final round of the tournament will feature a total of eight games at five sites with three sites hosting two games and single games at two other sites. The full schedule, along with links to the CIAC.tv contests can be found on the CIAC Tournament Central.

The full schedule of games being broadcast is as follows:

Viewers can consult www.cptvsports.org for re-air schedules for the games as well. All live broadcasts on the CIAC network will also be available on-demand following the conclusion of the matches, and DVDs of all broadcasts are available for purchase at www.CIAC.tv.

This fall marks the first full season of the partnership between the CIAC and PlayOn Sports which provides live broadcast coverage of regular season and CIAC Tournament contests.