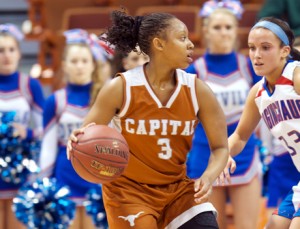 The Trailblazers and Millsaps both had to adjust to one another before the team could get to that point, however.

Millsaps had only coached college basketball before she arrived at Capital Prep last season. She had been the head coach at Bloomsburg University (Pa.) and an assistant coach at three other schools.

The Trailblazers played for their first state title in their first season under Millsaps. They have the potential to win the CIAC Class S championship this season.

“I think we are the best team in the state,” Millsaps said. “I think we have some of the best players from the one to the five position. The kids are versatile at every position. The kids who come off the bench — we go eight deep, which is good for high school — any of those eight can start for any team. Most don’t have that.”

Millsaps was an assistant coach at Southern Connecticut State when she accepted legal guardianship of her nephew, Kevin. She didn’t believe she could be a college coach and raise him the way she wanted, so she jumped at the chance to coach Capital Prep.